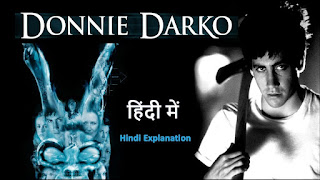 The story of ‘’Donnie Darko’’ starts on 2nd October 1988 in a small town in America. Here a young boy named ‘’Donnie Darko’’ is shown. He hears a strange and mysterious voice. He goes outside his house sleepwalking. He sees a man in a huge-sized rabbit costume, he introduces his name ‘’Frank’’. He tells ‘’Donnie’’ that this world will end in 28 days,

6 hours, 42 minutes, and 12 seconds. The next morning, ‘’Donnie’’ wakes up in a Golf playground. He goes to his house and sees that the engine of the plane is crashed in his room. His elder sister ‘’Elizabeth’’ tells him that the Investigation team FAA couldn’t reach its reality and from where it came? In the next few days,

‘’Donnie’’ keeps seeing that man ‘’Frank’’ in a rabbit costume. His parents send him to the lady Psychiatrist and believe that he has severed ties with reality. The thoughts that come to his mind about ‘’Frank’’ in daylight are all illusions. These are the symptoms of Paranal Schizophrenia, it’s a mental illness. ‘’Frank’’ is affected by Donnie’s movements. As ‘’Donnie’’ breaks the water pipe of High School and because of this,

the school is flooded. In the next scene, a character named ‘’Gretchen’’ is shown. She is a girl. She shifts to Donnie’s town with her mother with a new identity so that she may escape from his cruel step-father. ‘’Donnie’’ starts seeing her vision too. On the other hand, the lady Psychiatrist was doing the Therapy of ‘’Donnie’’.

She hypnotizes him. This session, however, comes to an end when he mentions the name of a girl. She was a famous actress. Later, ‘’Donnie’’ is shown shooting the bottles in the open ground, when his friends are doing other things. His teacher thus compares the process of bursting to a short story’’Destructor’’ and says that’s its effect. That teacher gives a lesson on different behaviors and then calls a motivational speaker to deliver a lesson on attitude. ‘’Donnie’’ doesn’t like that speaker. He rebels against her and goes against her. ‘’Donnie’’ talks to his science teacher at Frank’s request. He asks him if he believes in time travel? That science teacher gives ‘’Donnie’’ a book named ‘’Philosophy of Time Travel’’. This book was written by School’s first science teacher named ‘’Roberta Sparrow’’. She has become an old woman now.

She lives outside this town. While watching the football match, ‘’Donnie’’ notices that a bubbly liquid is coming out of people’s chests around him. It shows ”Donnie” where these people will head to? Then a bubbly liquid comes out of his chest too. ‘’Donnie’’ chases it and it takes him to the bedroom of his house. He searches for a gun there. Then, Donnie’s teacher calls a motivational speaker for delivering a speech in the school assembly again, where ‘’Donnie’’ insults her.

‘’Donnie’’ finds motivational speaker’s wallet on the road. He gets to know about his address. ‘’Frank’’ asks him to set his house on fire. ‘’Donnie’’ does the same. When Fire Brigade comes to put out the fire, they find strange images of children from his house. This shows that he isn’t a good person and he is arrested. Donnie’s teacher goes to Los Angeles with Donnie’s mother and the dancing group. It means that Donnie’s mother isn’t home. Whereas, his father was out of station for business purposes.

He prepares a Halloween party with his sister ‘’Elizabeth’’ in her house. “Gretchen,” a newcomer to town, also shows up at the party. She is so worried and tells that her mother is lost. She meets ‘’Donnie’’ for the first time. When ‘’Donnie’’ remembers that ’Frank’’ predicted about future that the world will destroy in some time, so he takes this girl and both of his friends with him to find “Roberta Sparrow”,

who wrote that book. Two boys try to break into Roberta Sparrow’s house. Here, ‘’Donnie’’ fights with them in front of her house. A car coming there kills ‘’Gretchen’’ and she dies. This car’s driver was Elizabeth’s friend who is his sister. His friend’s name was ‘’Frank Aderson’’. He had worn the rabbit costume. In a few seconds, ‘’Donnie’’ sees the second ‘’Frank’’ again. He was standing in the bushes.

‘’Donnie’’ shoots her eye with his gun and take his dead body to the house. When he comes home, he sees a vortex above his house. He comes home and places his dead body in his parents’ car and takes him to a nearby town. When he reaches there, he sees that plane in which his mother and members of the dancing group were coming back. They get trapped in the Vortex. Their jet engine got separated too. Incidents that occurred in the last 28 days, get rewind. As ‘’Donnie’’ wakes up in his room,

he remembers that it’s the 2nd of October and laughs. Then a jet engine falls into his bedroom and kills him. That’s how ”Donnie” dies. The (lives of the) people around the town who have been affected by ‘’Donnie’’ wake up from their painful dreams. ‘’Gretchen’’ has never met ‘’Donnie’’ before but she comes to his house and she gets to know about his death. Donnie’s mother and sister see each other and exchange waves. It seemed that they knew each other but they can’t remember where they met each other in the first moment.