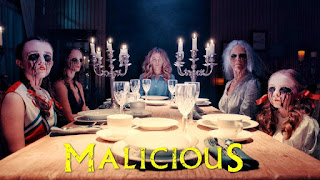 As the movie starts, we observe a house near a lake where a married couple is residing. A lady is sleeping in her room at midnight but her husband is taking alcoholic drink outside. That person was seeming very fearful. He is gazing a painting for along time.

Then he stands in front of a mirror after sometimes and hits his head in the mirror. As a result, he has been bruised. Hearing these sounds, her wife is jolted awake. She comes downstairs to see him. Her husband is not in good condition and kills her with iron rod. Many years later, a joyful family is shown again. In this family husband and wife are leading their happy life.

Male’s name is Adam while the name of girl is Lisa. Adam is in fact Math professor. He is offered a very good job with good salary package by a university before a time. They also arrange a good residence for him which pleases him. Then they shift from city to town house. On the other side, Lisa is expectant. They are very rejoiced due to this. They continue their discussion taking this topic either it will be a baby boy or baby girl. If baby boy comes, his name will be Adam Junior while baby girl name will be Lisa Junior. They are very contented with their happy life especially for this house.

Their house is splendid and spacious. And they also select a room for their baby. And Lisa’s sister Biki has sent a gift of mysterious box for them at the same day. Adam tries hard to open it but in vain. Then they think as Biki has joked with them. Inspite of this thing, they keep that box. Adam goes to his job next day.

And he instructs Lisa before going as she will take care herself avoiding to lift the heavy weight especially of baby cradle. Because they had still not set the baby room. He also asks  that they will arrange it together. But Lisa keeps herself engaged as Adam leaves. And she sets the baby room enough including baby cradle. Because she was not taking that baby cradle heavy. Then she concentrates on that box which was not opened by Adam. A strange thing happens here as Lisa opens that box effortlessly. Opening it, she finds nothing. Then she goes for a walk keeping that box. Then she encounters a crying lady whose body is blood stained. She is repeating a word as I have lost my baby!! Noticing her condition, Lisa wanted to help her.

But she utters oddly seeing Lisa. She says, the baby in your womb will not be your own!! He will take him!! And people will begin fearing you! And she also says that you will be unable to rescue your baby! Hearing it, Lisa is got worried and returns back to home. She informs everything calling Adam. But strange occurrences start happening with Lisa at the exact day. She overhears the crying sounds of baby from baby  room.

She goes upstairs to understand the situation. But she is left astonished seeing a lying  baby girl in the baby cradle. She does not know that what is going on! Because it is reality not a dream. The baby’s face is suddenly changed as she takes her in her lap. After that, Lisa loses her consciousnesses. Then Adam finds wounded Lisa as he returns back to house in evening time. And her blood has also wasted too much. He takes her to hospital immediately as a result she is survived but her baby is no more. And the more regretful thing is this when doctor breaks the news, Lisa will never be able to breed a child now. And it has happened because of lifting heavy weight. Adam thinks as it happened due to the  baby cradle. Lisa did not follow him inspite of his forbiddance. Lisa’s sister Biki also arrives in their house hearing this. And she decides to stay with Lisa for some days. So that Lisa may restore her condition. After this incident, Adam tries to ask Lisa for many times ,

Why did it happen? And what had happened at that day? Had she really lift heavy weight? On it, Lisa speaks truth  about that forest story, odd woman, crying baby sounds from baby room and the presence of that small baby girl in that room. And she forgot everything as she lifted that baby. Because she had lost her senses at that time. One thing was clear that there was happening something strange with them. And Adam also finds that mysterious box which was opening effortlessly. Adam tells Lisa about it. But Lisa says that I had opened this box at the day of that occurrence. Then they ask the reason of this given box from Biki. It was not opening before but now it is.

And it is also empty. On it, she says that I had purchased it on the sale of one house ‘s goods. So I gifted it to Lisa. In fact, this box had inspired Biki at first and then Lisa. So she had opened this box. But they are not informed about it so life goes on routinely. And Lisa begins to feel something in the house a few days later. And it was untold. As Lisa’s reflection often acts differently in the house mirror. And one morning, Lisa hears the crying sound of baby while doing yoga with Biki. She also shares it with Biki and moves to baby in fear room once again for checking. And a grown child girl is lying in the baby cradle once again. And the most strange is this,

she is only visible to Lisa not Biki. Then she assures her sister of her stable condition saying she is really seeing a child girl. Then Adam finds that Lisa is not on her bed at night. As he goes to check Lisa , he finds that Lisa is starring at a painting while standing near a chimneypiece. She tells Adam as something strange is happening with us. Because this painting was different when we faced mishap. This painting has changed completely. Before, this painting had the 4 playing children while a woman was watching them. But it is not as such. And this painting has changed in reality. Because that woman was watching aside not on her kids. And only Lisa realizes it not Adam.

He says that you have become as such because of losing your baby. So you are disturbed facing such condition. And Biki also faces a strange occurrence. She observes that the mirror was not reflecting same. And the girl in the mirror was not seeming Biki. At first sight, her reflection attempts to kill her. And it affects on her mind as such that she leaves without telling her sister. Lisa does not feel good but such things were happening with her so it was not strange. And she used to view a child girl who called her mama. Lisa is get irritated from all these. She tells Adam, there is something mysterious vile power in our house. Then she says that there is a professor Clark in your University who researches the mysterious powers.

He may help us. Agreeing, Adam meets professor Clark because Lisa is very afraid. Adam  does not believe on any such thing so he asks Dr Clark to end the suspicions of Lisa. As he approaches their home, Dr Clark senses the presence of unexplainable entities. In fact, Dr Clark is blind by birth. But he had inborn ability to feel the ghostly things. And he informs Lisa that this house is not cause what is happening with all of you. But it is another thing. Then he gets information about that mysterious box. Then he knows that an unknown evil was bound in that mysterious box. Opening it, it was released.

And it is with the opener of the box. And where they move, it will remain with them. Adam is got furious hearing it. And he gets Dr Clark out. And he says that you have made her afraid rather than to remove her doubt. Then Dr Clark explains that you are unaware that you are both in a great disaster. But he does not hear him. Then something begins to happen at the exact night. When he catches the sight of a woman and an old lady. They both scare him. Believing on everything, he again calls Dr Clark at his house. Then Dr Clark tries to help them. He knows through his research that these ghostly occurrences are not due to this house. And the cause of these happenings was that box. Because there is  unknown evil demon which was living in this World for a long time without its own existence. And its victims are the unborn babies.

It means that it kills the baby before coming into World. And the big example of it was Lisa who has faced the same. Nothing has happened with her. Rather, it was the  evil power who did everything with her. It means, we notice that Adam and Biki tried to open the box but it was only opened by Lisa. This box is only opened by the expectant ladies. Coming out, it kills the unborn baby. And the seen kids to her were none but the categories of her unborn babies. That kid had same growing figure with time  if came in the World. As first, Lisa encountered the baby,

grown child, girl and that old lady. And it was the prototype of baby. And this evil power was found in the looking glass and the paintings because of its nonexistence. And this evil power shows the different strange things controlling the minds of people. And such had happened with three of them many times. But this evil power cannot be perished but bound. And the sacrifice was essential for its imprisonment. It means that evil power may be bound if that woman is sacrificed. So this was the cause that a wife was killed by man in the previous family. And that box was purchased in their house goods. And Biki had gifted to Lisa. And the seen lady in forest was the spirit of that dead lady who was bound in that box with that evil power. But Adam did not want to kill Lisa. Adam tries hard to rescue Lisa from this trouble.

But this evil power makes people to kill others hypnotizing them. Now hypnotized Adam also murders Lisa like that man.  And that evil power is again bound in that  box. And Adam has been imprisoned. But before leaving, he hands over the box to Biki. Now it was going to happen with Biki because she was also expectant. And movie also ends here with it.