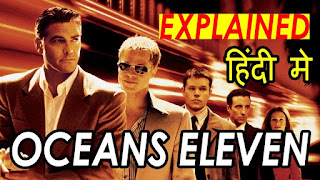 The movie starts, we see George Clooney in the role of Danny Ocean. In the very first scene, he was released from jail and meets his partner in crime Rusty Ryan. The role of Rusty is being performed by Brad Pitt. Whereas Danny was released from prison under one condition that he won’t leave his city. But he violates the rule, in the next scene, we see Danny and Rusty go to Los Vegas from California. Here they meet their old partner Reuben. Here they explain to Reuben about their plan of Robbery. Firstly, Reuben denies it. But after learning the details of the plan he says yes. Essentially, they intend to rob the three major casinos in Las Vegas. The owner of all these Casinos is named Terry. Terry and Reuben both were old enemies, that’s why Reuben agrees to accompany them. Along with this Reuben also finances them. While discussing the plan they talk of Bellagio named Casino which was big in all. All of the earnings from three casinos are brought in this casino. If we rob this casino we may not have to go to other casinos.

And there they estimate 160 million US dollars. In the next scene, we see Danny and Rusty make a team. In which different specialty people were added. Some one was expert in security and some one know casino management very well. And someone knows explosives work quite well. All of the team members prepare themselves very well. They keep an eye that how much security  was there at Bellagio casino, how many people were there? Who visits there and when the stock is shifted? And many other activities. And apart from this they make exactly the same copy of security vault of Bellagio casino. So that they could break it and check the security system. So that when they go for robbery they may not feel difficulty. Here Terry comes to know that his ex wife who was divorced is current girl friend of Danny Ocean. Now as Terry knows Danny, the day robbery was planned he goes to the casino openly, so that he remains in everyone’s eyes. When Terry sees him he becomes suspicious and makes him locked in a room.

Here a bouncer comes to hit Danny but he had made the settings before. He had awarded the bouncer much money before. He helps Danny to go up to the floor. And all the team members enter from this area and comes to room. So that they could approach to security room, where that Vault was present containing much money. Now they have reached the vault room where the seize it and the team starts working. Now we see Rusty who was carrying the mobile phone. The phone rings and he asks to put Terry on call. During the call he tells him that your vault has been seized. Now, neither you can take the money out nor any of your people can go inside. So it is better to take half of the money and give the other half to me. You have only this option. When Terry sees his vault from the camera, He sees the room in very bad condition. He sees that thieves were inside the room and it was locked from inside. Now we see that a SWAT team which was basically a police Squad enters here. Exchange of firing happens between the SWAT team and people inside the vault room. And here SWAT team run explosives. As the explosion happens the money inside catches up the fire. After some time SWAT team evacuates from there taking the necessary items. Terry gets much worried and he sees the video footage again and again.

He realizes that some time ago he wrote Bellagio on the floor. That was not written now. So what happens actually? Actually, the security experts of the Danny team were showing him the fake image. That was basically of their training room. And here Danny and his team had dodged them completely. Now we see that the SWAT team was no other but Danny’s team. And they don’t pick their item from bags rather the remaining amount of Terry. They all go infront of them and no one could judge, that these bags were containing money or SWAT team weapons. Now we see that Danny ocean was locked in the same room with the Bouncer, where Terry had locked him. Terry was totally sure that Danny was behind all this but Danny shows himself innocent. And denies of any involvement in this robbery. Terry hands Danny Ocean over to police in anger. Although, he had not any proof Danny had violented the rule that we knew at the start of the movie. That he was not allowed to leave California but know he has come to Los Vegas. Now we see Danny’s team as they planned to distribute the money equally.

They distribute the money and follow their ways. After some months when Danny Ocean comes out after punishment, we see Rusty and Turk outside the jail. Who was there to pick Danny. And they go far away from there. But Terry was still suspicious about this and we see Terry’s people were following them. Terry never forgot anything, he knew Danny was behind all this. And he can find his money by following them. And here the movie ends. If you enjoyed the film, please subscribe and share it with others.