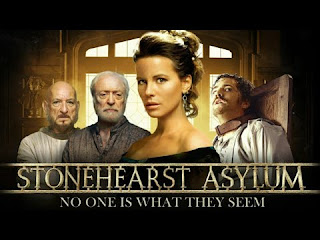 Stonehearst Asylum. The story is in fact of England’s Asylum which was built in 1800 This Asylum was vast, old, and unpopulated. It means, it was far from population And Snow falling occurs in winter. In spite of it, people use to come here for their treatment. Then we see a doctor of Oxford University also comes in Asylum in a shear cold His name was Edward. The purpose of his arrival in Assylum was to know the human mental disorders clearly. He finds this place odd. First of all, he meets a man called Finn with his companions Finn was rude by nature, having guns. Their Expressesions show as they dislike the arrival of Edward. But they allow him to come. Coming, Edward meets Asylum’s superintendent Silas Lamp. That person tells,

no letter of yours has been received they welcome and think, perhaps the letter was not received because of the worst condition of the weather but suspect Edward. then Dr. Lamp poses few questions over Edward. He also says as you could go to the nearby Asylum of your house to understand the mental disorders. It means,You could go there easily, why have you visited here that is far away from your house? And also says What will you find in this Asylum that you could not find of your nearby Asylum. Edward responds I have come here for the serious cases of humans’ mental disorders. He says I will feel pleasure if I learn something before leaving this place. Then doctors agree to the stay of Edward and keep him in the same hospital. On the same day, doctor shows Edward few patients who are there for treatment including 30 years old girl. seeing that girl did not appear that she is insane. At the time, she is seen playing the piano. Her name was Aliza. she suffers from such disorders as touching her sensitive part, she is stiffened. This disorder was hysteria in which a woman loses her senses.

The case history of this girl’s presence here includes that she had cut off the ear of her husband. due to this, she was brought here. Edward notices the different treatment of doctors from another doctor. He converses with patients friendly, patients are not restricted so walk freely. And the behavior was not as hard as in other Asylum as electric shocks and cold water shower. This asylum was also different from other asylums. It was unusual that doctors and patients who lived here used to dine together. Edward takes it strange but he thinks, it may be the newly invented way of doctors. So he does not think much.

Then we see Edward and Finn arguing with one another over dinner. When Doctor takes notice of this fight, he becomes outraged and commands Finn to offer an apology to Edward. Hearing him, Finn asks Edward’s repentance and provides him a sip. Edward is nearly taking a drink but Aliza forbids him to not take a drink. Afterward, she meets Edward separately, saying he should go from here because of his unawareness Later, she says, it is better for you to go as soon as possible. She also asks to leave luggage here so no one may suspect him. On it, he replies I have come here a short time ago so cannot leave He asks about the reality of this place but she does not tell anything. Afterward, Edward becomes suspicious about this place. His whole night passes in thinking. He feels himself in danger so keeps pistol for his protection. But he wants to know the happenings of here so cannot leave.

He hears sounds coming from outside. He goes to investigate the sounds. Pursuing these sounds he goes outside and comes to the basement. Then he comes down and reaches a place where many people are a prisoner Their behavior gives an idea as they were insane but not through conversation. They were not insane but the asylum’s residents.

They were doctors, nurses, and all staff. Famous doctor Benjamin Salt was also there. Later, he ponders if all staff is here, who are those people treating patients. Infact free people were insane including even doctors. They are the victim of mental disorders. they do not consider themselves insane but doctors and nurses. But Edward does not believe in them but confuse. Then Dr. Salt tells, we had received your letter a week ago. He also tells the history of Asylum, what had happened here A person named Silas had built it, when war broke out, it turned him into mad man. He was treated in Asylum but his case history was complex. And we did not know of his mental disorder. He was strange by habits.

He began to control everyone through his madness. Doctors used many ways to cure him but no one attained success. Uncontrolled circumstances turned his condition into worst He murdered four doctors among us. After this incident, we were prisoned here. and We were not given either food or for drinking. Now Edward could help them. Edward himself was worried about where he had been trapped. And He does not trust anyone neither he wants to except one person Aliza. he comes to Aliza immediately and tells the complete story saying this place is not good for us.

We should run away from here. I will take you with me at any cost. But Aliza refuses to accompany you because she, too, is a member of Asylum. she says, I told you to run but you have left here and are trapped like us. It seemed, Edward will not leave without taking Aliza. And On the other side, those people needed Edward’s help. He had 2 ways either he could free them or he could bring any support for them going outside. This task was dangerous because his life was at risk. But He thinks to take steps sensibly, he does everything craftily he pretends himself as he is unaware of facts and still takes them as a doctor. No one could suspect him observing such behaviour. Those doctor’s head  Silas himself  expected the arrival of a new doctor who will work under him. He took Edward appropriate for him. Along with this, Edward also helps the prisoner doctors providing them the food and water. He asks about mental disorders Silas from Dr. Salt. it means, which disease is being suffered by him. Because Edward can solve the problem knowing it. As It is the root of all circumstances. But all insane fake doctors had removed all records.

And we know the purpose of Edward’s arrival here. As the movie begins, Aliza is shown, doctors treat her taking her as a subject. There was also a class with Edward’s presence. Seeing Aliza, Edward starts liking. So Aliza was the purpose of Edward’s arrival here. And he comes here to release Aliza. Afterward, 2 doctors try to escape but murdered by Finn when he knows about them. Because he was also psycho patient, he already had killed many people. And It was the reason for his presence here. Now fake doctors feel insecure because winter is at its end and people will start to visit here. and their secret will be exposed. Later, Silas applies electric shock therapy over Dr.Salt and removes his memory. Edward also helps because he thinks that he will be mistreated like other doctors. He decides to run from here in the New year. A night, he drugs the drink of everyone, Finn looks at Edward doing it,

so the quarrel is held between both. Beating Finn, Edward injures him. He tries to give that drink to everyone but fails. Because Silas knows what Edward is going to do with them Later, Edward also comes under Electrotherapy as was done with Dr. Salt. It is the treatment of the removal of Edward’s memory leaving him insane. But Edward had much knowledge about Silas as the strengths and weaknesses of him. Silas starts the Elecro therapy on Edward, Edward expresses his last wish. He says it is my request to have a look at photo taking out from my pocket. as a doctor does it, his memory comes back resetting his mind. Because that photo reminds many horrible incidents too. These incidents were related to his insanity.

Because Silas was once a doctor who attended all wounded people in the war going there. And he was fed up doing so. The wounded people use to scream much as the sounds began to disorder his mind And In this worried condition, he took the lives of many. They screamed feeling pain. There was a young boy among them, after him, he never forgave himself. And Coming to the Asylum, he built up a new imaginary World where he became a doctor.

And according to him, he is caring for all coming patients there. He was doing so with the knowledge that doctors don’t treat well with their patients. After that, Finn again tries to kill Edward but fails. Moving ahead, he is caught in electric shocks and dead. Electricity circuit prevails fire in Asylum. Later, Edward brings everyone out from this Asylum. In relation, he liberates doctors. He also protects Aliza and needs to take her with him.

A shocking incidence tends to occur here. After several times have elapsed, a doctor named Edward enters to take Aliza. seeing him all doctors are gone worried and say if you are Dr. Edward, who pretended to be Dr. Edward and wanted to support us? Now we come to know that Dr. Edward is also insane. he started to like Aliza on first look and wanted to be with her. And the doctor who was treating him was real Dr. Edward. He had chosen the identity of his own doctor. And this is the cause, he was spending days with those insane. Because insane can understand the other insane. But the same mad man had come, disguising himself as a doctor. Aliza and Edwards start their life happily.