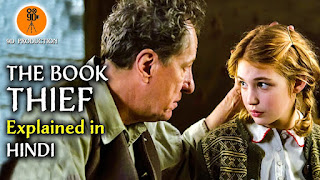 The starting scene of movie begins with the sight of clouds above the Earth. And a death narrator male voice is heard.  That no one lives forever either he struggles too much My advise is to not be panic  in any situation, Now ,a passing train is seen in a snow field. And the main character Liesel is there. This era is Nazi Germany World War II. Liesel encounters her younger brother’s death in train who is buried at a place stopping.

Now,the time of 1938 in Germany is shown and Liesel sitting in a car passes through snow field. Actually she is going to her new foster parents. Mother’s name is Rosa and father’s name is Hans. She reaches at her house. Next morning ,Hans is playing a musical instrument and says good morning as Liesel comes downstairs. Rosa asks Liesel to call me Mama while Papa to Hans. After a while ,Someone knocks at the door,

There is a child named Rudy. Later, he becomes the best friend of Liesel. Liesel goes to school with Rudy. When Rudy and Liesel reach at school and move to class where they find standing kids before the teacher. Teacher asks the name of Liesel and gives chalk to her so that she might write her name on the board. Liesel is illiterate so she marks 3 crosses on the board where we know that Liesel  does not know how to write. All kids make fun but teacher says ‘silence’ to everyone and asks Leisel to go to her seat. Afterward Liesel comes back to house and her mother takes her  inside. At night, Leisel’s father says her Good night and sees that Liesel has a book. Hans asks,Is it yours in reality?Leisel replies,”it is always mine, It is my brother’s. Then he asks,Do you know what has been written here? On it Liesel replies ,

No! Because she does not know how to read. Hans says,I am not a good reader. Inspite of it , Let’s start! Then they read the book. Wearing a uniform,

Liesel sings a song about Germans next morning. Meanwhile,the time of November 1938 is shown where army is breaking the window glasses in a market behaving violently. The pages are shattered in the street everywhere. Now a House’s door is knocked of a house by someone. And a new character named Max is introduced. He is a jew. He escapes from soldiers. Then Liesel house is shown again where Liesel’s father Hans teaches her reading and says ,promise me about my exact burial after my death. Then Hans takes book from her saying to come with me. I have surprise for you and brings Liesel in basement. Where the writing words and alphabets are on the wall. Calling it dictionary ,he hands over her a chalk and permits to write these words here. Liesel is fond of reading and writing so fills with joy. Leisel says ,

Thanks papa! Afterward ,someone arrives to take Hans at house knocking the door. Hans calls Liesel to come hurriedly otherwise we will miss the parade. It is the night time, all town people are gathered at a place where an army officer is  presenting a speech. He says,during the National Socialist Revolution,our nation should be decreased. Our determinatioon is to clean ourselves morally and intellectually. Education, theater, literature ,

film and press are all supporting pillars which can shape the personality of our nation This the reason of our gathering so that we may free ourselves from intellectual dirt. Then they burn the stack of books that was kept in the middle of them. And he says, we have to root out the illness that has infected Germany for the last 20 years. We will face our enemy if war occurs  and stand for our future until we get the final victory. Such war will destroy our enemy. Liesell hears it attentively. And all people  are sloganizing. Officer also says that we will eliminate all the communists and jews. He then Sloganize, Great German Adolf Hitler! Then all people sing a song straightening their hand. After a little time,everyone leaves. Liesel goes to burnning place of books and hides a fallen book in her coat picking it up.

Coming there,Hans says that I have asked you to meet me in church. Liesel says, sorry papa! Books’ pages are scattered everywhere. Leisel coughs because little burnt book is in her coat. Hans says nothing knowing about it,but only utters ,we will keep it secret and read  it like other books going in basement. Liesel  is pleased. And asks, Was my real mama communist? Was he was Hitler who killed my mama? And says I hate Hitler. Hans forbids to say it before anyone.Coming to home,Liesell reads the book name”The Invisible Man” by H.G Wells. suddenly,someone knocks at the door. Infact he is the same character Max who is first Jewish fighter.

He asks for help in worried condition. Rosa and Hans suggest him to go upstairs. Hans informs to Liesel,Max’s father died  in war sacrificing his life for me. And I am owed of his family. Then he says to Liesel,  give me your words that you will neither tell bout our visitors to anyone nor your soul. Liesel assures to keep words and goes to school next day. Playing with Rudy after school, she comes to her house. When Jewish Max is asleep at night and has a book in his hand. Liesel is nearly to take his book, suddenly Max awakes.

And calls her a curious girl. She returns back his book asking about the book. Max says ,it is about Hitler. Liesel asks, are you hiding yourself from Hitler? Are you communist? Have they killed your mom? On it Max replies ,No, I am Jew. Next morning, Rosa comes to Liesell, assigns a work to her giving some Laundry clothes. And asks to visit a house. In a little time, she reaches at that house with Rudy. Where an old lady Ilsa calls her inside taking into library. She pehaps got it that Liesel is inteested in learning.

Touching books, Liesel feels pleasure and takes a book named” The Dream Career”. She then remebers Rudy is waiting for her outside so leaves telling to old lady Ilsa. But old lady Ilsa offers her to come for book reading at any time. Now Max is shown in basement because Hans’ family has fear of soldiers’ raid. Because Max is Jew. Liesel also goes to basement and continues book reading. And a new word always writes with chalk on the wall of basement considering it  difficult. Max asks her, Where do you find these words? On it ,Liesel calls it a secret.

Later, she reveals the place where she goes for book reading and memorize it. Afterward , Max gifts Liesel a book.He tells , I have learnt from my religion that every living being,every leaf and every bird is only alive  as they have secret words of life. The words matter if we differentiate between clay and ourselves.Words are life. Gradually, Snowfall increases the cold and Max falls ill due to the basement’s cold temperature. Now Liesel thinks, Max will be dead and puts her dead brother’s pick on him. And reads books as ever.”The Invisible Man  by H.G Wells. A stranger arrived here in  February and wintry days of biting wind and driving snow. No one could know about him until he is dead. Later,

Liesel goes to Old lady’s house library through window stealthily and steals a book. Because Ilsa’s husband forbids her from using laundry services. With the passage of time,she continues to steal books one by one in a hidden way from library and Rudy also knows about it. But she says ,I have only borrowed. After that , Liesel also reveals about the Max to Rudy. Now many soldiers make their visit in this area for the checking of jew or communist presence.

Liesel’s family is alert. At night,The area people move to a place with their  bags coming outside on the raid of soldiers. Leaving Max at home,Rosa and Hans with Leisel also hide at that place. But Max comes outside from house and feels pleasure. He is looking at the stars of sky happily suddenly a soldier van approaches. He hides himself quickly. He decides to leave next day so that this family may not get harm because of his presence. Liesel becomes sorrowful on Max’s departure. Max leaves in the darkness of night. Liesel weeps a lot ,Rosa and and Hans are also distressed. Then It is also known next day that Liesel’s best friend has also been selected for the elite training.

That he will start in summer. Meanwhile, Hans also receives a post for his selection by army. Leisel says,everyone is departing even Rudy. Hans advises to care her mother Rosa because she is not enough strong. Hans also leaves. After a long time, Liesel is sitting on the stairs holding a book. Within a time, ranger van approaches there and Hans comes. Liesel is pleased seeing him and says papa! as you have come back to home! Hans sitting in his house talks with Liesel , Liesel says, I was surprisingly thinking about Max as where is he? Hans says the same.War is broken out again because these are war days. Everything is destroyed next day,

Houses are dashed into dust, dead bodies are shattered everywhere. Everything is fully perished . A  live girl is found under a place by soldiers. She is Liesel who is survived. And She is wounded and says mama,papa as comes out. But her family is no more. Rosa, Hans and Rudy are all dead. she loses her conscious. Coming into senses, she finds a book under the bricks. At the same while, old lady Ilsa arrives there in her car , whose house Leisel used to go for book stealing. Running,she embraces that lady.Two years later,

Liesel is shown to serve in a Rudy’s father tailor shop. And she catches the sight of Max at door and she meets him pleasurably. Now the 1945 time is shown. And United state troops has occupied Germany. Now the story moves to its ending.The same cloudy view as in opening scene was shown. Then death narrator male voice is heard. I encountered the great things. I have attended the worst destruction of the World. I have also seen the great wonders.

But I’ll just say that no one lives for ever. Finally, I arrived at Liesel, filled with egotistical pleasure. Because During these 90 years , she had wisely spent life. Her stories touched the soul of many people. Max’s friendship was as everlasting as Liesel’s. In her last thoughts, she faces many lives which were tied with her. As her three kids and a grand child with Hans,Rosa and Rudy. In the end, there were no words but peace.