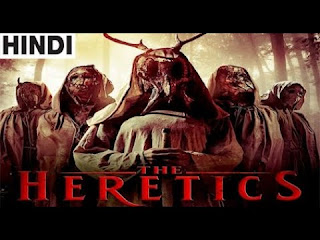 At the beginning of the movie, it is shown that some odd people are performing rituals on a girl. They are not performing an ordinary ritual but a demonic one. Meanwhile, they commit suicide cutting their throat.

The purpose behind their sacrifice is to strengthen the devil on which they trust. Then we are shown the same girl on whom ritual was being performed. She is sleeping but disturbs because of a nightmare and sits after awakening. Whereas five years had passed since the incident, she was still in a trance. It was the cause that she used to have nightmares. This girl’s name is Gloria who lives with her mother ‘Ruth’. Gloria has a friend John but her mother was not comfortable with her friendship. Despite this, Gloria and John were close friends. Then we are shown Gloria and John attending a therapist session. Then a present woman there is telling the committed violation of her husband to her. Then Joan says, destiny cannot be blamed in everything. Violating your husband, you should avenge. Joan is violent by nature so expresses her anger.

Joan and Gloria are resting and Joan gifts her a necklace for her coming birthday. Leaving Gloria near her house, Joan returns back. Gloria is then kidnapped by someone. She awakens to find herself chained in his van. Gloria moves to her cell phone with difficulty and calls her mother. Meanwhile, that kidnapper again makes her fainted using a drug. Before losing conscious, Gloria’s screaming is heard by her mother through a call, She also notices the demonic mark on his hand that she had observed on the hand of cultists. That kidnapper takes him away from the city into the cabin of the forest. Then Joan reaches at that place where Joan and Gloria used to supply the food to the people. Gloria is not there so she calls her mother. On the other side, Gloria’s mother who has searched her whole house. Not finding her, she hears the same voice message which has the recorded screaming of Gloria.

Then they both report to police about the kidnapping of Gloria. And Joan was more worried than Gloria’s mother about this kidnapping. She asks police rudely to search Gloria and also decides to seek her own. Gathering many people in church, she decides to search Gloria with their help. On the opposite side, Gloria again has nightmares. Restoring her consciousness, she recognizes this kidnapper who is one of the cultists, Who had performed a ritual on her 5 years ago. Kidnapper tells her that he is doing all this for her safety. He will keep her here for a specific time. And she will be released as complexity of danger reduces. Gloria is unable to understand that man. She asks after a time, Why is doing as such with her? He says, I had caught your sight when the ritual was being performed on you. I did not like that and I had dramatized of suicide when everyone was cutting his throat.

So he escaped from there avoiding suicide. He again tells her that he is doing for her safety. Then kidnapper starts visualizing as Gloria is seducing her. Stabilizing himself, he notices that Gloria’s condition is worsening. Her mouth was bleeding and Gloria’s condition was getting more worsed. On the other side, police discover the necklace outside which was gifted by Joan. John goes everywhere taking the pamphlets with the statement that Gloria is missing. She asks about her from the people. Then a boy forbids her telling anything. She becomes violent and asks him after placing her knife on his neck. Gloria again sees the same cultists and she is afraid. That kidnapper restores her senses and stabilizes her . Both hallucinate and he says to Gloria that you will have to stay here till dawn. You are safe here.

Everything will be alright after that. Ruth calls Joan where a police officer is also present. Police officer investigates Joan about the necklace and her action of placing a knife on a man’s throat. Suspecting her, a police officer asks to come for investigation with him. Being violent, she stabs the knife into the police officer at first. And then she finishes Ruth after asking about Gloria. Gloria’s condition was worsening there. Asking the kidnappers’ name, he tells, my name is Thomas. She asks, What is going on with her? He tells that performed ritual on you before 5 years ago, It was actually performed to bring back devil Abaddon into the World. It is performed Under the light of the locust moon. Tonight is also locust moon.

The ritual will be performed tonight for bringing Abaddon into the World. Keeping all in view, they have made  Gloria target. She says, all cultists had committed suicide there. He says, everyone did not sacrifice his life. And Joan who is still requesting people to search out Gloria. Joan visits a secret place in her house, where devil Abaddon’s statue is fixed. She apologizes Abaddon saying I have lost Gloria. Then she punishes herself for this cause. Here a great fact is revealed that Joan was a cultist. She was not in love with Gloria. But making Gloria her pawn, she wanted to bring devil Abaddon into the World on this Locust moon night. So this is the cause, she was searching Gloria with a keen interest. Gloria’s back is pained. Thomas finds two holes on her back after checking. He is frightened seeing it.

He moves another room for taking knife in order to finish Gloria ending this story. Coming close to her, Gloria seduces him and both are fainted. And Gloria is transformed into Abaddon at that place. Seeing Abaddon, Thomas is frightened but finds nothing later. The reason behind this, she was bewitched from that time when the ritual was performed on her. It was the cause that the devilish power in Gloria is stopping Thomas from killing her. Because Gloria was a pawn through whom Abaddon will step in the World Gloria requests him to take her to the doctor. Thomas says, It will not be secure! Joan knows through a man who has seen a van near Gloria’s house and the driver had a burn mark on his face. In addition, he reveals the path he took. Hearing it,

Joan understands and moves to that direction with her friend. The reality is exposed that Thomas and Joan are siblings. And the cabin in which he brings Gloria, is actually their parents’ cabin. Gloria wishes to Thomas that she wants to meet Joan. Thomas tells everything as she was Gloria who was the cause of his burnt face and broken foot. He says, joan is searching you at all because she wants the presence of Abaddon in this World. It cannot be out of danger to step outside before dawn. When Gloria is alone in the cabin, she is terrified encountering the devil Abaddon. Escaping from there, she informs Thomas about it. Thomas brings her back into the cabin and notices that the hair fall of Gloria has continued. And wings are growing from her back holes. He knows that laid devil inside her is coming out now. Here Thomas decides to finish Gloria. But observing her worst condition, he is unable to shoot her. Then the inner devil of Gloria speaks out that after my rebirth , I will be your soul taker. Saying it, the devil empowers Thomas and scares him, visualizing his burning sights. Feeling fear, Thomas runs outside the cabin. Contrarily, Joan reaches near Thomas van and she is confirmed noticing Gloria’s cell phone that she has reached here. Then she also finishes’ that friend. seeing Thomas , Joan makes him unconscious attacking on him. Coming to Gloria, she starts her ritual.

Gloria’s condition was worsened and Thomas also restores his senses. Thomas tries his best to explain Joan but all is in vain before her. And she replies, I can feel the coming arrival of her devil Abaddon. And she begins to utter the satanic words.  Consequently. all devilish souls are arrived there. That Satan is empowered as Joan speaks out the Satanic words. And it gets over Gloria. Thomas enters inside, breaking the door to stop Joan. But Satan again visualizes him while capturing his mind. Breaking the trance of the devil, he attacks Joan with an axe. Then he captures Gloria and chains Thomas throwing him away. There is a few time for day break. Thomas sets him free. But Satan appears there because of Joan’s satanic words and the presence of Satanic souls. Thomas kills Joan in order to stop her.

It creates peace there. Thomas brings Gloria outside where the sun is rising. Thomas says to Gloria, I had promised of your safety till dawn. Gloria is alive and comes into consciousness. Thomas pleases seeing her alive. Gloria says, I had also told you that I will take your soul above all! Then she finishes him. And Gloria starts gowning like Satan.

And her wings are grown like Abaddon. Now it is clear here that Gloria is not Gloria but she has transformed into Abaddon Satan. And Abaddon is considered the angel of evil. Abaddon is defined as destruction. As it brings devastation. And he is the commander of a swarm of locusts. Abaddon’s face is like human beings, body is like a horse and girl’s like hair. Summarizing, it is a dangerous devil. He is so savage that demons also feel fear from him. Here we get a lot of information about devil Abaddon and the movie also completes here.