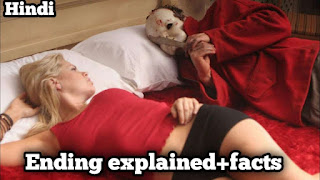 A boy named Tyler appears as the movie starts. He is the admirer of horror movies. He  is obsessed by the movie ” Hills Run Red”. And it is believed , this movie is scariest movie of all. There is protagonist who is the serial killer with horrible face named Babyface. This movie was released in theatre but later it was banned. Viewers of this movie were in small numbers whose comments declared it a scariest movie. Even the directors of this movie were missing after releasing only this movie. Tyler was mad to watch this movie. He used to avoid his friend Serena in this state. One of Tyler’s friends is Lalo who advises him to not take this movie too serious. It is just a movie.

But Tyler was completely obsessed by the watching of this movie. Then Tyler comes to know about the director named Wilson Concannon’s daughter Alexa Concannon used to work in a night club and who has been actress of this movie in her childhood. Tyler visits to meet her and asks about that movie which is missing. Alexa says, I cannot respond to you here because of the fear of being exposed due to the hidden cameras. She asks her to wait outside. On the other side, Serena was provoking the emotions of Tyler while meeting Lalo. Tyler waits for her outside sitting in the car. While coming, Alexa sits in the car and takes Tyler to her house. Everything is not clear in her mind taking that movie.

Because she was too young at the time of this releasing. She says, This movie may be found at my father’s house! That house is situated in a forest far from this city. And the address of that house is also not known by Alexa because she was young at that time. Tyler was mad to watch this movie at any cost and thinking to make a documentary on it. So he goes there with Lalo and Serena. They ground to a stop on their journey. Alexa finds a headless doll there. It is very scary so is thrown there by Alexa. Then she feels the sounds coming behind.

Turning back, she encounters the Babyface. Observing him, she runs and comes across Tyler but Tyler does not see Babyface. Afterward, they move to their destination. They get off the same gas station which is also shown in the trailer of the movie. Then  they ask about this movie from the present people of that place. An old man informs them, The bloodshed in that movie was real! Otherwise, they also investigate about that movie from other people. A man says, the place of murdering a man has been sealed! Moving to their decided place, they reach into a forest. The car cannot be driven farther so  they go there taking their luggage. Where they found a hooked trapper.  Tyler tells that we are at that place where the scene of movie had been made. That scene was made on a girl whose feet were fixed with the placed hook on the ground. And two hooks were fixed in her shoulders.

Those hooks had been tied with the tied branch of tree with a rope. And the girl was hanged due to the bent branch of tree. Then the rope is cut by Babyface so the branch takes its own place. Because her feet are fixed with ground so she could not move  upside. Consequently, her face is detached from her body moving upside. And her body of below side leaves here. Alexa does not feel better and she asks to return back but Tyler resists. And they move ahead again. Late night is passed in forest by them. They camp there. Revealing the story of Babyface, Alexa exposes that his mother had been seduced by a man which causes the birth of Babyface. His illegal father had locked him into a room decapitating him so he may avoid his thought. Babyface has a cute doll. Cutting its face, he fixes it at the place of his head.

He does as such to avoid the hatred on his father’s part.  Tyler is checking the recorded videos of the whole day. He notices a strange thing in the recorded video. Looking carefully, he notices Babyface there. He hides the camera as Alexa comes to him. Some sounds have also been recorded in his camera. He moves to listen to them then suddenly, he is attacked by someone making him unconscious. There was a hand of those people of making him senseless whom they meet at the gas station. Attacking on Tyler’s friends, they tie them with the tree trunk and they also try to seduce Alexa. Suddenly, an attack of an axe pierces a man.  They are unable to understand that what is going on. Babyface immediately kills a man appearing there. Then a man fires a gun  on Babyface but he does not get any harm. He also kills that man. Babyface is relaxed hearing the sleeping song of Alexa as he catches her. Alexa escapes from there getting a chance and Babyface also pursues her.

Then other friends are also untied facing a great difficulty and Tyler asks them to move to car. And he himself goes searching for Alexa. In search of her, He moves inside a house stealthily reaching there. Searching Alexa in the whole house, Tyler does not find her. And Babyface attacks Lalo and Serena behind him. Lalo asks Serena to flee and tries to horrify  Babyface using a flare gun. And Babyface kills Lalo after shooting him. Here a fact is revealed that Babyface has brain to use. Serena reaches a house where Alexa and Tyler are present avoiding the pursuit of Babyface. Tyler gets many film reels inside the house. And it also contains the recording of night cub relevant to Alexa and Tyler. Then he hears the screaming of someone.  He finds tied Alexa going there. Freeing  and opening her ropes, he tells that their video is still being made by someone. Coming outside,

they both find Serena. And Babyface also arrives there breaking the door. Catching Tyler, he throws him into the wall. Then he catches Alexa. And Serena escapes from there. Alexa asks him to pursue Serena. Following her order, he does the same. He runs after Serena. Serene goes into the house where the hanging dead bodies are in every corner of it. Searching for her, Babyface reaches there but is unable to find her. Because she is hidden in the barrel full of blood. Coming out from there, Serena cleans herself as Babyface leaves. She leaves that place. She is unaware that Babyface is keeping his eyes on her. So attacking on her, he grips in his clutches. Coming into the senses, Tyler finds himself bound with the chair. He notices the film reels in his surroundings. There was a film reel named “Hills Run Red”.

Suddenly, movie’s director Wilson Concannon arrives and Tyler is shocked seeing him. He shows a movie clip to Tyler where  Babyface was not perfectly acting. Disguising Babyface, he kills him. Here one more fact is opened as why had that movie disappeared? The reason was because there was a real murder. Then Wilson tells Tyler, Babyface is the offspring of Alexa! And it is a fact! He also tells that Babyface came into the World when Alexa was only 13 years old.

And his father is no one but Wilson. He says, I am the one who seduced his daughter. It is also true that the incident of cutting the face and later stitching it happens in the movie. This family is very harmful. On the other side, Alexa is tormenting Lalo while cutting his body. And Wilson rushes over there, grabbing Tyler. Noticing it, he is aggressive and says that there is only one director of movie. Calling Babyface, he asks him to kill Lalo. But Alexa herself kills him pushing Babyface back. And the quarrel is held between father and daughter. Taking the advantage of it, Serena frees herself. The dispute reaches at the level as a result Wilson ends Alexa firing his gun. Babyface loses his control over him observing his dead mother. And he also ends Wilson. Then he tries to kill Tyler attacking on him. But Serena attacks him from the back side exact after that. And Babyface also passes away.

They think that they are now survived but Serena becomes senseless receiving the hit of spade by Alexa. And she hits Tyler leaving him unconscious.  Coming into consciousness, Tyler finds the number of dead bodies in his surroundings. And he is tied with them. Then Alexa plays her made movie ” The Hills Run Red”. Tyler is watching a movie when she leaves. He sits through the entire film. And the occurred murders in the movie  were all real. It was not a fake story  but based on reality that Babyface is ending everyone. He kills others showing his brutality. Tyler is gone insane at the ending of the movie reacting strangely.

Watching this movie makes him mentally disturbed. He starts crying and laughing at the same time. Then we notice Serena is alive and seized by Alexa. She is expectant and Alexa wants to make her new born baby  second Babyface. She sings a sleeping song to her Babyface. Consequently, Serena begins to scream. And here the movie is completed.