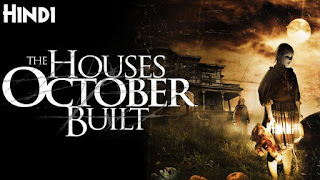 As the movie starts, we are shown the Halloween Festival. which is celebrated in the whole world on the 31st of October every year. This festival is celebrated in the memory of dead people. In this festival, people make their faces horrible and organize many horror festivals. Mostly, people experience fear at these festivals. Such as they spend a full night in the jungle and they plan to go to a haunted house. It is a story of a group consisting of five friends. Bobby, Jeff, Brandy,

Mikey, and Zack decide that they will go to the most dangerous place in America, this Halloween. They will feel the actual fear. For this journey, they rent a car. ‘’Jeff’’ install some cameras in that car. He keeps a camera with him too. Their purpose is to capture everything they will experience in this journey. They are super excited. They set out for their journey a few days before Halloween. They go to Halloween like festivals and enjoy themselves a lot. They want to experience a lot of fear. For this purpose, they visit many haunted houses. Basically, haunted houses were also made for this purpose. Ordinary people lived in those houses but they scared other people. This thing seems really interested to them.

But they get scared too, which seemed clear through their recorded memory. They start their mission by going to the first haunted house. There, they see a strange girl with a mask. ‘’Zack’’ gets scared because of her and tears begin to flow from his eyes. He laughs at his condition after this. After that girl, they see a very strange thing again. They see that by the road, they’re going, there’s a man who has worn mask and a joker costume, is staring at them for a long time. They feel it strange because only in haunted houses, people try to scare other people like them. But that Joker wasn’t in a house. He was all alone, far away from the population. He was scaring them on the road. But they don’t take it seriously as it was Halloween. So, this wasn’t a big deal. To fulfill their purpose, they move forward.

They decide to spend this night in the forest. When they are sitting, a man comes and sits with them. It seemed that something strange was happening with them. But they don’t take it seriously because of Halloween and ignore this. Then the next night, it is shown that the same girl wearing the same mask comes in front of their car, whom they saw in the first house. Strangely, that house was 100 miles away now and it was left behind. They are sitting at a place when that girl comes and sits near them. She keeps sitting for some time. She wasn’t speaking a word but continuously staring at them. Then she makes horrible voices.

Everyone looks at her shockingly. Then she goes away. They didn’t know her intentions. Then the next night, they see a man wearing a white costume. He held an axe. Seeing him, ‘’Zack’’ gets afraid. They get understood that he’ll kill ‘’Zack’’. But he doesn’t do this and leaves him and goes away. Only two days are left behind in Halloween. They don’t stay there because they wanted to go to various places to have fun. ‘’Zack’’ finds many people who tell him about the ‘’Mysterious group’’, named ‘’Blue Skeleton’’. They secretly do their work.

They keep changing their place and are secret from the whole world. They live in secret places every Halloween. No one can approach them easily. Their purpose is to make people feel extreme and un-experienced fear. ‘’Zack’’ have also heard that they also torture people to a limit. Thinking of this, he wants to take his friends there so that his friends can enjoy, on which they all agree. The experience of the fear they had had was not enough for them. They were in search of a new thing. So they set out in search of that mysterious group. They find them a lot. Then ”Zack” finds some hints to reach them. They’ll have to go to a bar,

where people will tell them about that group. but strangely that bar was located in a strange place. Their residents were also very strange. Mainly, the cameras weren’t allowed there. Some people become rude to ”Brandy” and then leave. ”Zack” has also got the secret password of that mysterious group. Strangely, these people won’t go to them. Those people will come to find them here and then bring them with them. Then we are shown a man who has a camera in his hand. He was also present in their captured video. While they are sleeping, he records them all and steals Zack’s ID card. Waking up the next morning, they get this video on their mobiles. They get shocked and wonder that who done this? It is also shown in that clip that someone has put an animal’s heart in their fridge. A pumpkin is also captured in this video. It also has a message that where and when they’ll meet that Blue skeleton group.

There were also some blue masks for them to wear. They become excited and think that they have found that blue skeleton group. Halloween night comes and they go to that location. But on the way, ”Zack” is lost somewhere. But in reality, he isn’t lost. But he was killed in fact. Three people have killed him. Bunny costumed man, Joker costumed man, and that masked girl. They kill him and take him somewhere with them. They wait a lot for ”Zack”. When he doesn’t come, they try to contact him. They are calling ”Zack” but it wasn’t responding. A voicemail comes in response They tell them that their frinend ”Zack” is with them. If they want to get their friend back, they’ll have to come back to a particular location. Hearing this, they get scared because this thing prove very dangerous for them. Now they want to end their mission and go back. But now they were unable to do anything. It was too late.

They are really scared. But still, they go to that location to bring their friend. They had little feeling of fear because they were thinking that torturers are none other than the group of ”Blue Skeleton”. Their job is to harass and scare people. As they reach the location, that mysterious group catches them. They tie their hands and masks are worn on their faces. They are sat on a bus and a camera is handed over to them. Everyone is dropped at separate locations. It was such a horrible scene. Later, they see that they are in a dark house, from where they can’t see a way to escape. They call for help. And scream that we don’t want to play this game. We have to end our mission here and we want to go back to our homes. Those people have masks on their faces too. And these were the people who were chasing them even before the beginning of their mission. These people have killed ”Zack”. They have trapped those four friends in trouble too. They couldn’t escape that haunted house. Then they are buried alive in a coffin under the ground. They scream out for help but no one comes to do so. They were trapped in there. And that’s how they lose their lives.

Their killers were feeling happiness to torture them and to see them in this difficulty. Their purpose is also to hurt their victims. Their purpose of installing cameras was also seeing them being hurt so that they can be happy. Every year on Halloween, this enigmatic group goes out to hunt people. These people were psycho killers and criminals. They don’t harm anyone except those who come to them by own. And here, the movie ends too.