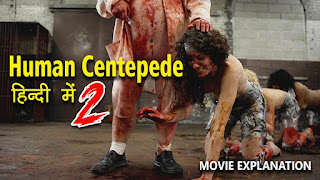 >Then we are shown a man who is watching ”The Human Centipede” movie on his laptop. >His name is ”Martin”. >He was about 40 years of age and is quite fat to look at. >He had Asthma and everyone considered him useless that he is an unavailing person. >He worked at London’s Parking lot tool >He had watched ”The Human Centipede” movie many times. >Then suddenly, he feels the stir in CCTV footage of parking. >When he observes, he sees a young couple fighting in the parking. >The boy’s name was ”Ian”. He had his father’s car, of which he had lost keys. >”Martin” brings an iron rod and goes to that couple. >”Ian” thinks that ”Martin” came here to break his car lock, on which he says bad words to him. >After listening to his insult, he immediately takes out the gun which he hid in his pocket. >He shoots Ian’s foot with this gun. >Seeing this, Ian’s friend screams a lot. >When ”Martin” sees this,

he also shoots her in the stomach. >Then, with the same iron rod, he strikes them on the head. >They get faint immediately. >Then ”Martin” brings his car there. >He puts both of them in his car. He comes back to his room and starts watching ”The Human Centipede” movie again. >”Martin” has a book also. >He puts his hand on the book and that book only contained pictures of ”The Human Centipede” movie and its actress. >Then he takes his truck and goes to the house which he has just rented. >When the house owner demands the rent, he injures him with the same iron rod. >Later, he brings ”Ian” and his friend into this house. >They were tied firmly with tape. >After this, ”Martin” takes a scissor and tears out Ian’s friend’s clothes and remove all of her clothes. >Then suddenly, Acting Management Company calls ”Martin”. >They tell him that actresses of ”The Human Centipede” can’t come to London Auditions. >because they are so busy and not a single day is free for them. >Saying this, they cut the call. >The next morning, ”Martin” is shown in his house. He was laying in his bed without clothes.

>Just then his mother comes there and She screams and wakes him up. >because he was sleeping and he had an appointment with the doctor today. >After this, his mother leaves the room. >After his mother leaves, he looks at his book again, gets dressed and comes outside. >The first thing, he used to do was feeding his pet which was a centipede and then he used to go to his doctor. >Outside, Martin’s mother was telling his doctor that I often heard ”Martin” >talking about a centipede of 12 people. >In answer to which, the doctor says ”Martin” may feel the pain of the centipede’s bite. >When he was younger, his father sexually abused him. >On which, Children Rights Team send him to the Jail. >But still, Martin’s mother blamed ”Martin” for this. >Her doctor didn’t care much either because he also sexually abused ”Martin” by taking advantage of his mental illness. >and that’s why ”Martin” didn’t like that doctor and hated him a lot. >As the doctor goes, ”Martin” and his mother are having lunch. >Then his mother tells him that she stays really upset because of ”Martin”. >Thinking about this,

she decided to kill ”Martin” and herself. >Just then, the noise of loud music comes from the upper floor of their house, which causes much disturbance to Martin’s mother. >She starts hitting the roof. >This noise is heard by people living there. >In fact, aggressive bodybuilder lives there. >As he comes, he beats ”Martin” and then leaves. >”Martin” gets injured badly. >”Martin” had watched ”The Human Centipede” many times after this. >He behaves like Dr. Josef >and wears a lab coat like him. >Then he copies the surgery drawing made by Dr. Josef in his notebook. >Then he kidnaps a couple from the parking lot. >The wife of that man was pregnant. >Later, he kidnaps two more girls. >He brings them n a house where he has kept other people. >First of all, he removes their clothes. >He lays them down in a vertical sequence. >After all of his hard work, “Martin” suddenly suffers from an Asthma attack. >He inhales medicine by his pump and comes back to his normal condition. >Just then, the acting management company calls him again. >Now they say that actresses, ”Rachel” and ”Yenni” of ”The Human Centipede” movie are ready to come for the audition. >They are about to come to London. >They do this because ”Martin” has told them a few time ago that he is an agent of the director of this movie named ”Quentin Tarantino”. >”Tarantino” is so impressed by the performance of the actresses of ”The Human Centipede” that he wants to make part 2 with them. >Its audition was organized in London. >”Tarantino” is in fact,

a famous American director. >He is famous worldwide for making disturbing movies. >Then the scene of midnight is shown when ”Martin” reaches home, >he sees that his mother is trying to kill him. >But ”Martin” understands his mother’s will. >Martin’s mother finds that book under his bed, in which details of the human centipede were written. >In the same book, he talked about 12 people, on which he’ll perform a centipede operation. >Her mother gets to know his intentions. >She becomes very aggressive and tears that book apart. >Seeing this, ”Martin” becomes really upset. >Then ”Martin” wears his lab coat and bites his mother with his pet centipedes.

>He hits his mother’s head many times with a rod. As a result, his mother dies at this point. >He takes his lunch with the dead body of his mother. >When the bodybuilder from the upper floor reaches there, ”Martin” injures him too with the same rod. >After all of this, he shoots his own doctor in a parking lot. >Then kidnaps his own driver and a girl from there. >He brings them to his rented house. >Just then, he receives a message from actress ”Yenny” that she’ll reach London at 6pm. >”Martin” picks ”Yenny” from the airport at the exact time in his truck. >”Yenny” was so excited that she came for Quentin Tarantino’s audition >but what she didn’t know about Martin’s thoughts. >She didn’t know his plans. >”Martin” takes ”Yenny” to that house. >As she enters,

he hits her with the iron rod and she gets faint. >He carries out some surgical tools and that painting from his bag. >”Martin” had 12 people present there. >He was going to make a model of the human centipede just like Dr. Josef. >Firstly, he makes marks on everyone’s body like Dr. Josef. >After it, he pulls out ligaments of their knees. >He neither does this by performing any surgery, nor he injects them anesthesia. >He was just using two small tools. A knife and a hammer. >Then he pulls out their teeth one by one. >Everyone was screaming but they were tied with a strong rope therefore they couldn’t help themselves. >First of all, ”Martin” cuts the skin of a man’s hip >But his blood is wasted and he dies on the spot. >Seeing this incident, ”Marin” gets really upset. >After this, except that pregnant lady

he ties everyone like the human centipede >He stitches the face of a person to the back of the second person and then his backside to the face of the third person. >He does this by using a stapler. >He staples them one by one and ties them to each other with tape so that no one can separates. >Finally, he joins them and makes a centipede of 10 people. >”Yenni” was first in the queue and he used to feed only ”Yenni” like the doctor. >But she doesn’t eat. >Then he gets a pipe and a funnel and feeds her with them. >He suddenly receives a call from acting management that other actors of the human centipede movie are coming for an audition. >”Martin” was talking on call when ”Yenny” was screaming loudly. >He becomes really disturbed and cuts her tongue with a scissor. >Her tongue starts bleeding. >”Martin” injects them Laxative. Due to which they get thin stools. >He gives an injection to the patients with constipation so that their stomach gets clear. >Suddenly, they all get thin stools >First of all, ”Martin” enjoys this scene. >but this scene was so disturbing and dirty and seeing this he starts vomiting too. >Just then, that pregnant lady, who wasn’t a part of the centipede, feels pain. She runs and sits in a car. >She gives birth to a child in this car. >On the other hand, Marin’s centipede was getting separated because it was breaking and everyone was getting apart. >Seeing this, he becomes very angry and kills everyone by cutting their throats.

>When he comes to ”Yennny” to kill her, she hits in the middle of his legs and he falls down. >She takes a funnel and inserts his pet centipede in his backside. >Due to which he starts suffering badly and falls to the ground. >Then we are shown ”Martin” who is watching ”The Human Centipede” movie in his parking lot. >The moral of the story is, everyone considered ”Martin” useless which was because of his mental illness. >That was the reason he got impressed by Dr. Josef and wanted to make his own human centipede like him. >But he wanted to do this experiment with 12 people. >Whatever ”Martin” did, were whether his imaginations or he really made a centipede >and now he was rewatching his favorite movie ”The Human Centipede” at his work place.