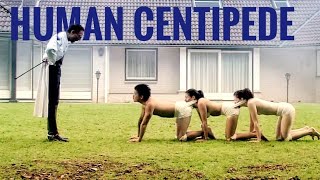 Movie starts and we see Professor Josef Heiter who is sitting in his Mercedes  and is looking at a picture. In that picture, three dogs stand in such a way that one is behind the other and the third is standing behind them. On seeing this, a truck comes to a stop and the truck driver is going towards the forest for the toilet, Professor Joseph shoots his gun and targets him. we see two girls, one of them is Jenny and the other is Lindsay. They both belong to the US but have come to Germany for an outing.

They had gone to the club to celebrate the party and Lindsay was taking on the call about the party location. Although both used to travel they had no specific idea about Germany. Both take rented car and travel at night to the location of the party. The party’s location was not known to them. Passing through the jungle, comes out quite far and has lost their way and gets stuck in the problem when Jenny takes a U-turn of the vehicle and their car’s tire gets punctured. They try to call Car repairing service, but it is a forest, so there is no signal on their mobile.

And they get stuck on a main road that has no population around it, except the side of the forest. They both decide to remain in the vehicle. and should take help from anybody who passes from this road. Then a car passes there and they both tried to take help from him. An old man in this car sees that both look alone and seeing them he tries to harass verbally. They are scared too much and lock the car from inside. Then that car goes from there. Then they find a home where they can call for help. It is late at night and they both walk towards the forest. Then they see a light coming from a house.

They both walk towards this house. Then suddenly rain starts heavily. They both get very wet when they reach this house. They knock on the door and Professor Joseph comes out. They tell him their problem and tells him to call an emergency for a car repairman. Both are alone, the professor invites them in. There was a strange painting in the professor’s house that she was looking at with her strange eyes. And that whole painting is quite disturbing. The professor then asks them, are they tourists? and one of them says that we are from New York and have come here to visit Germany. She again tells the professor to call the emergency call repairman but the professor does not pay attention and ignores them. He then asks, “Are you, relatives?” They she replies,

“We are not relatives, but we are friends.” Then the professor gets up and goes to the kitchen to get some water. Also makes a fake call that Jenny and Lindsay think he might be calling the call repairman. Then he mixes a drug in the water Which Lindsay drinks But Jenny drops the glass. Seeing this, the professor treats them very badly. Then he goes basement to clean the water. Going basement, he fills an injection. On the other hand,  Lindsay was in a faint condition. Because of drug effects. But Jenny doesn’t, and she tells the professor to call again, But he refuses. Then he injects the same injection into the neck of jenny and she has fainted immediately. Then the professor is having breakfast and Jenny and Lindsay find themselves in the professor’s lab.

They realize that they are tied to the bed. In addition to these two, there is a man who is also incarcerated, and he is the truck driver. The professor needs to enter the lab and notifies the man which he does not compliment and that it is time for someone like him to die. Then he infuses a toxin into his arteries and dies as soon as if he’s. He then buried the body of the driver in his garden. The professor then uses his anesthesia dose to deliver a man unconscious. He’s from Japan, and he’s sharing a bed with Jenny and Lindsey. They all came to senses and start screaming because they didn’t know what the professor would do to them. He comes forward to clear their confusion and introduces himself as the professor Josef and he is a retired surgeon. He was a mad doctor.

One of its weirdest professions was stitching living things. Not long ago, he did the surgery with three dogs behind each other. And that mad doctor was going to perform the same operation on Jenny Lindsay and Japanese. Because their skin tissue matches. He was also telling them about the operation details. He first pulls out their Knee ligaments and finish them completely so that cannot stand. He will connect subject B to the backside of subject A and also subject C to the backside of subject B. He will take off the skin of their hip and put the skin of their jaw there. And connect the three as seen in the diagram. So, when the subject A eats a food, its waste material will go into the mouth of subject B, and it also will go into the mouth of subject C. It is obvious, that this process is quite a cheaper and disgusting and no normal person can do it.

Because this doctor is crazy and he likes to do dirty experiments. It is his first experience with the human body. First of all, he injects a Lethargic injection to the Japanese man that causes him in an unconscious state. Jenny is screaming loudly and the professor tries to give the same injection to her as well. Meanwhile, Lindsay opens the rope with her teeth and runs away. She has drip needles in her hand which is pulling her skin and cause bleeding. She goes to a room and closes its door but professor arrives there and break the window of that room. Lindsay also runs away from there and falls into a pool. The professor also comes there and covers all pool with a lid.

Then suddenly electricity gets off. Taking darkness’s benefit, Lindsay runs away. She goes to the professor’s lab and opens the rope of her friend Jenny who is unconscious due to the injection. She Drags Jenny from there and brings her outside, but Professor also comes there. He also hit the same injection to her and now Lindsey becomes unconscious as well. Then he picks both of them and brings to the lab. Then he starts the operation, first, he brings out the subject’s ligaments and teeth. Then he uses the marker to mark their body. Then removes their hip and face skins, and does a long time operation [Scene end]. Then a few days later the professor is shown while drinking. And in front of him, his human centipede is placed on the ground. Their wounds are not yet healed and the professor tries to force them to stand up together. They are connected in this way that at the forefront is the Japanese man. The middle is Lindsay and at the most end is Jenny. Jenny is at the end and she is considered as the tale of the centipede.

They are feeling pain but professor makes a photograph by standing them forcibly. Then he shows them a mirror and they stated constantly crying by watching their condition. He keeps them in the cage and behaves like animals. And this thing goes on and on for many days. He forces Japanese men to eat like dogs. Professor again breaks the Japanese man jaws. Then we see that the professor is treating them very badly and take them outside. Then the Japanese need to go to the toilet. On rejection, his human waste goes into the mouth of Lindsay. Lindsay has to swallow it, it was a dirty process in viewing even in thinking as well. Professor checks their medical condition, which shows that Japanese is fine but Lindsay has constipation because she is not digesting the human waste of this man. On the other hand, Jenny is not receiving any food or power source for her body. Because she did not eat anything and getting weaker. Her wounds are still fresh and she seems to be dying soon. Professor thinks to relocate Jenny. Meanwhile,

a sudden knock on the door appears and we see 2 police officers. The police come there to find Jenny and Lindsay they disappeared for many days, Their car was at distance from the professor’s house. The professor tells them he is a doctor and he is so busy that he has no time to go out. He doesn’t know anything about those girls. The professor asks them to drink they say we will have coffee. He says no you will only get water. On it, the police officers suspect him and the professor was taking water while mixing drugs in it. The officer tells him someone has listened to the voice of the disappeared girls from his house. And we have found your Mercedes from the truck whose drivers missing for many days Hearing it, he shouts and asks them to drink water.

They throw the glass. Making an excuse for the towel he goes to take the injection. From which he can make them faint. But this time he was exposed in front of the police officers. In his explanation, he says you can’t tease anyone without any reason. You can’t blame me without any warrant. They move to take their warrant. The professor comes to his lab and he doesn’t see his human centipede there. Because they hide. They stab a surgical knife in his belly. He falls as a result of it. The Japanese man cuts the neck of the professor and its mass comes in his mouth. Then they try to go upstairs. Because they were weak and were operated so they can’t go upstairs. Their stitching area was bleeding. They climb up the stairs but the professor comes behind them.

He starts licking their blood from the stairs. The Japanese break the mirror and the doctor also arrives there. The Japanese cut his neck with the glass and he dies there. Meanwhile, those police officers also reach there. But they didn’t see anyone. They go to his lab there was also none. The police officer feels intoxicated. Because of the drug that he gave him in the water. When the other officer searches he finds them.

But their condition was worse. The officer goes to the professor to hold him. He was sitting at a pool. His companion police officer was also killed. Then he shoots the other police officer with the pistol of the police officer. In return, the police officer also shoots Professor Joseph. They both die and there wasn’t anything left except for the centipede made by Dr joseph. It was a cheap experiment of a mad doctor. The movie ends. If you like the explanation of the movie so kindly tell your feedback in the comment section.