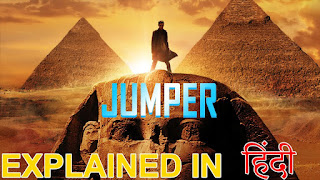 Welcome back to my channel Movie Insight Hindi. We have devoted about 17 hours to this movie explanation, so show your support by liking and subscribing. This story is basically between Jumpers and Paladins. Jumpers are those who jump from one place to another. It means they teleport from a place to other. Paladins are those who prey on jumpers who discover them. It means they hunt and kill the jumpers. Let’s start the story. In the first Scene, David Rice standing on the mountain appears and begins to tell his life story.

As for where he goes and takes his dinner. Story Flashback starts. David Rice is in love with Millie Harris and likes her. Here David gifts Millie a snow globe here. But Another boy snatches that snow globe teasing David. Snatching snow globe, that boy throws it away because there is frozen ice. When David goes to take it back suddenly the ice is broken and David is nearly to drown. Here David tries to come up, instantly he reaches a library where he encounters his first jumping experience. David is completely unaware of what is going on. Anyhow, When he comes back to the house, It is also told that his mother had left him when he was 5 years old. And his father is an Alcoholic, Which means he is a drunkard. David’s father does not care about him having rude behavior. David does not respond to his father and comes to his room. After a time when David’s father comes to his room, David was not there. David is again in that library which we talk about in the first scene. Here David gets understanding as he is teleporting. David comes back to his home, taking money and clothes he again leaves. And David leaves his city to another. Now he is at the age of 15 and has no control over his power. Going to a forest, he intends to check his power. It is known here that jumper David Rice can teleport only thinking or seeing the photo of that place.

He thinks to rob a bank teleporting himself he reaches that bank and robs. So far, David lives his life as it is. Roland Cox appears here. Because he had got the news that robbery occurred without the breakage of any door. So this attracts the interest of Roland. Roland is basically the head of Paladins who kill jumpers catching them. It is also disclosed that Roland is hunting jumpers for many years. Now the story starts after 8 years. David is shifted in New York and there is a good deal of photographs before him. And he used to teleport to different places with the help of them. And through these photos, he goes to various places as in London, Paris, Dubai and many other places. On the other side,

Roland Cox is seen catching, hunting and killing jumpers one by one. Here Roland catches a jumper in the Amazon forest and kills him using a machine. Roland does so thinking that the Humans are not the attorney of power but God. Knowing the address of David, Roland comes to capture him But David escapes saving his life. Escaping there, David comes to meet Millie. The same Millie who was given a snow globe by him at the beginning of the movie. They meet intimately here. Millie asks about his job. On it, David says I am working in the bank nowadays. While discussing, Millie tells David it was my dream to visit different places. But I cannot go now due to my responsibilities.

David says it is not a big deal, let us go to Rome! And they go to Rome by flight and stays in a hotel. On the other side, Roland investigates to capture David. David has still not told to Millie as he is a jumper. And at their visit place, David meets Griffin. Here he knows Griffin is another jumper like him. They are conversing meanwhile, paladins arrive there. Paladins is the secret agency which is headed by Roland Cox. On the one side are jumpers while the other side is paladins. Paladins kill jumpers capturing. Anyhow, when two paladins arrive, Griffin kills both of them. Basically, they are two paladins. A dead body of one is left there while another one is taken at home by him. Observing it,

David pursues him and reaches his home. David asks why did you kill them? The conversation is being held but he misses Millie, he comes back to Millie. Millie and David are still present there. Local police come and arresting David on the basis of suspicion takes him to the police station. While Interrogation, David says I did not kill even unaware of how were they murdered. At that place, a lady approaches who is the mother of David. She is police Investigation officer. And David’s mother releases him. How is his mother approached, it would be told further. Leaving the police station David sends Millie to her house. Because David cannot go with her as his passport is in the custody of the Police. Millie is concerned, but David has yet to inform her that he is a jumper. On the other side, Roland comes to David’s father, Roland tries to gather information about him and his mother. He gains enough information and afterward kills his father. It is a technique of Paladins to kill the jumpers’ relatives after getting information. And Roland does the same.

David does not know what is going on with him? For its information, he goes to Griffin. Griffin tells him that I am hunting paladins because they harm our families. Because Paladins have killed my parent when I was 5 years old. Now I am hunting and killing Paladins. As he hears it, David becomes upset and immediately comes to his father. He finds his laying father on the floor, he quickly takes him to the hospital through teleportation. He comes to Griffin and asks him to unite as a team. Because making a team we can kill Roland easily. Because Roland is gathering much information about me, he will surely go to Millie and may kill her as he killed my father. And I have to save Millie’s life at any cost. But Griffin refuses it and he teleports China. David also goes to China after him. Jumping there they stunt marvelously. It has been shown in the movie. At last,

Griffin agrees and both are ready to fight together with Roland making a team. Here Griffin says to David, I will have to go to my house because there are a few weapons that will help us in fighting. And jumping he goes to his house. On the other side, David also jumps to go to Millie’s house for a meeting. Both are just talking as different Paladins and Roland Cox arrive at Millie’s house. And David reveals his secret to Millie at the first time and also shows his jumping. Seeing it, Millie is worried. And taking Millie, David jumps and reaches at the house of Griffin. We know one more thing for the first time that Roland Cox has a machine, that creates energy through which you can teleport from one dimension to another. same as the ability of jumpers. Using this machine, Roland also reaches the house of Griffin. The fight starts here.

Roland catches David using the wire of his Ultra weapon. And as Roland is about to kill David, Griffin saves the life of David from arriving there. When Roland finds that the fight is becoming hard, he kidnaps Millie and goes to another place. Because he knows that David will surely come after Millie to free her. On the other hand, Griffin is shown who is making a weapon to kill Paladins for a long time. And It is such a weapon that can wipe out all paladins just by pressing it. Griffin suggests it to David but David stops him from doing this because Millie is also there. If it happens Millie will also receive harm losing her life. Griffin says we will have to sacrifice a little bit but David disagrees. And taking remote of that machine he jumps to and fro. And the quarell is started between them so they continue to jump from one place to second and second to third. David entraps Griffin in the power line trickily. Griffin agrees to help if he frees him. But David does not trust him and goes to Roland Cox to save the life of Millie. And then catching David, Paladins imprisons him. He tries to teleport but cannot.

When Roland comes near David, he uses the full energy that he never used before. And teleporting the entire place, he transmits it into water. All are just about drowned, Suddenly, he teleports and comes to the library again. Here is a little fight between David and Roland. David teleports him in such a place where the chance of returning is impossible. After all, David goes to see his mother. Here he knows that his mother is also a paladin. And as a mother, she has the option either to kill David or go while leaving him. She sympathizes because David was 5 years old at the time. At last, the mother is matchless. As a result, David’s mother prefers to leave and does so. The film comes to an end here. If you like this video please like, share, and subscribe.