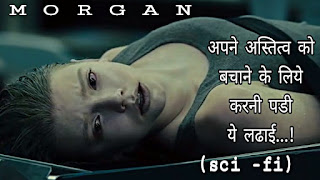 We see the private genetic engineering company named “Synsect”, as the movie starts. It is working on different projects. Actually, they wanted to create an extraordinary human being who may be better than ordinary another human being. They initiated their project with a hybrid biological organism but it was not biological. They used nanotechnology in conjunction with DNA.

It had all human emotions. The reason for human emotional response was this, the inserted DNA was synthetic DNA. It has nanotechnology. It was useful because of good cell growth and a strong immune system. And the immune system was stronger than human beings. And the mental ability was also higher than human beings. You can say that it seemed half-human being while a half artificial being. It has everything like human beings except the soul. Such artificial beings perhaps could not be made by any other laboratory.

This project had some specialists as scientists. They got artificial being devoting their whole life in this project. And this project was exactly the great part of their professional life. Morgon was growing up with the passage of time. She was jolly and liked by everyone. They used to treat her as their own daughter.  She was mostly loved by Dr Amy. She used to treat her as her own daughter caring and taking her for recreation. Then one day, Dr. Amy takes her for a walk in the forest as usual. Their trip had a limit but it was crossed that day. Morgen kills a wounded deer there. That deer was dying badly and its survival was difficult. But it was strange that the fixed things in the artificial being was not as such which could take the life of humans or any other living being. Seeing it, all doctors take it unexpected.

Afterward, they lock her up in a room as being dangerous. Because they had to report to their senior doctors. They used to command them which they have to follow. Morgan was a child of 5 years old but unique from other human beings. She was growing day by day. She dislikes her imprisoned life living in boundaries because Morgon was leading a free life before. She was remembering her free life. One night, a therapist comes to meet Morgan. She comes to talk to her. But Morgan attacks that therapist losing control over her emotions in this difficult situation. Consequently, that therapist’s eye is injured. After that, they don’t diminish the feeling of love for Morgen knowing that she has emotional responses like human beings. And the feelings are always uncontrolled. This matter is reported to their head office taking it seriously.

After it, Morgen was suspected. They assume they made an error in creating this synthetic being. Some experts are sent out to the place to investigate artificial wellness. As if they had genuinely made a mistake, they could be able to erase it. Leeweathers, a lady doctor, is sent out to cope with the problem. She is strict and resolves her issues craftily. Coming there, she starts interrogations from everyone. And she comes to know that all are very near to the artificial being. She dislikes it. And that wounded therapist blames herself for this incident exonerating Morgan. After that, Psychologist Dr.

Alan is selected to treat the mental disorder, Morgan. And it will be decided after treatment that Morgan is normal or not. Other doctors explain that you will not converse Morgan across the room not directly. Because we take it dangerous but psychologist does not agree. He wants to talk to her directly. Other doctors also agree on it. And psychologist Dr Alan  comes before her asking some questions from Morgan, She responds with assurance and wisdom. She says that I am regretful on my action which I committed with that therapist. She apologizes and assures of not doing it in future. Because it should be avoided. And that doctor was wise and he applies a psychologist  test on her. It means, it included some questions. Such question can anger any common person. So it is clear that the emotional response of Morgan was different from ordinary human being. Hearing it,  her condition starts worsening. When Dr Alan asks her to stop because Morgan did not want it. Getting angry, she attacks on Dr Allen biting on his neck. Now she was not out of danger for any common man.

After that, Morgon is intoxicated. While Dr Lee instructs all to kill Morgon. And they believe that it was created the flopped artificial being by them. They had still the affectionate feelings for Morgon but everyone is agreed. She is tied and everyone makes a plan to kill her. There is a doctor named Dr Darren who refuses to kill Morgen. The dispute is held between Lee and Darren as she refuses. After they make Lee senseless getting together and lock her in the Morgen’s room. They decide to escape taking Morgen. Morgen requests them to not kill her when they were getting ready to end her. I want to survive! So they take Morgen with them making her senseless and  Lee is locked there. As they bring her into conscious taking with them. Then she attacks on all. She kills Dr. Darren along with a nearby standing man injecting him. Now Morgan was changed because Allan had emotionalized. He had stirred her emotions including her anger and emotions. Because she takes everyone her foe not peer. And she kills everyone except Dr. Amy. Afterward, she takes Dr. Amy with her, The reason was as she had grown up with her.

Because she used to care for and take her for excursions. Before coming here, Dr. Amy promises that she will take her to the lake. Because it was not easy because of her imprisonment. She asked to take it to that lake because she is outside now. Amy was worried about the thought that what should she do? On the other side, Dr. Lee had made her purpose to kill that artificial being. She pursues Morgon and both meet in a forest. While fighting, Morgan seriously injures Dr. Lee. Later, Dr lee kills Morgon drowning her. She also kills all doctors of this project. Morgan was a small sample. Because they were working on artificial intelligence along with human behavior. And a great example was Dr. Lee regarding it. She looks like a human being but actually, she was not. She was one of the doctors’ projects.

An artificial being!! She was made before Morgan. She had no emotional response like humans but the thoughts of warriors. Now the issue is posed as to why they had been able to make Dr. Lee but not Morgon. Because they had ingrained positive feelings in Morgon. As human beings, we admire good things including such liberty and a variety of other advantages. Morgon used to love going to forest areas, lawns, and ponds. And it was not worried about the physicians’ project. So they forbid to create artificial beings like Morgen and make Lee’s artificial being more successful.