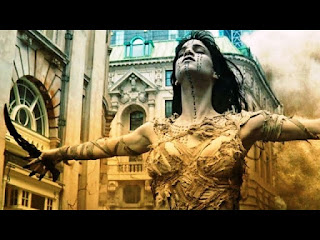 We come to know that the Egypt pyramid has a curse centuries ago as the movie starts. And the workers on these tombs used to be a victim of this curse facing the worst consequences. So many scientists, archaeologists, and researchers have always avoided these pyramids. Archeologists are those who search for ancient and the desolated buildings.

But archaeologists discover such a pyramid through NASA after a long time which was buried thousands of feet below the Earth. It means this pyramid has its own space under the ground. And the uniqueness of this pyramid was the difference in its shape with its ancientness. Other pyramids used to have 4 sides but this pyramid was three-sided. This discovery piques people’s interests and piques their desire to learn more about the pyramid. But Egyptians cannot allow research on these pyramids believing in that curse. Because they think that researching on them may bring a devastating curse. Curse means the natural disaster which will be uncontrollable by human beings. And protesting it, Egyptians come on the road  to stop it so that pyramids may not come under researh. Being logical, archeologists take approval from their government.

And they start digging near the pyramid after taking consent. Basically, this archeological team is composed of 5 members and it is lead by Dr. Miles. Dr. Miles’ daughter Nora is also a member of this team including other members. The whole team is excited about having the advanced equipment. They  have also the availability of satellite support and planetary surface exploration device provided by NASA. Digging continues. While digging, a gas is burst from there which is piousnes.. This gas covers the worker’s face and body and takes his life.

All other workers are frightened because of the death of this worker. They have heard about this curse and their belief is strengthened as they should keep themselves away from these pyramids. As being logical, Dr. Miles, Nora, and other team members don’t believe on such myths. Dr. Miles wants to make advancements in this work . But the protesters start more protesting due to the death of this worker. They say It is a beginning! These protestants want to stop this work of digging. So this protesting may lead to the Civil War. On the other side, American government representative is contacting online with Dr.

Miles. Seniors suggest Dr. Mile, you should stop working and return back to your country. Because Egypt government will ban your work forcefully if it continues. So it is better to return after stopping research. Hearing it, Dr. Miles and his team feel disturbed because they have planned and worked on it. Leaving this research in the mid does not make sense for them. Finally, it is decided to return backstopping this research. Further, we notice that  Dr. Miles’ daughter Nora does not want to take her step back but to accomplish this research.

She says to her team members while convincing, We should at least go in the pyramid to check, how is it different from others. Why is it three-sided? Why is it spread under the ground? We should at least check going underground. Her team is convinced by her. So they send a robotic car to check the pyramid for exploration . And they may find out its uniqueness. We also notice the uniqueness of these pyramids from other pyramids when the robotic car is moving inside of it. As it has been made for a special purpose. While advancing, something attacks the robotic car. Consequently, it goes offline and the camera connection is lost. They can no matter how long see the inside. Outside, they all assume that any dog or animal would have entered the pyramid and assaulted our robotic car, disconnecting the camera. NASA effectively gave them this expensive robotic car. As a consequence, they did not want to leave it inside as is. Before returning, those who wanted to take it away. They also wanted to go on more excursions.

The government had prohibited We also notice the presence of military here for keeping an eye over the scientists as they may not take steps against law and return back. So they plan to enter the pyramid hiding from military and will bring back their robotic car. They all plan for going inside. It means, get harmed, no one outside will know as where have they gone. Before going inside, they bind a thin wire with a stick outside and take the other side of the wire with them. Basically the purpose behind it is as they may not lose the right track while returning. The returning path may be tracked easily through this wire. Now all enter inside.

Moving ahead, they find 3 similar paths. One way is leading upside. And There are placed the ancient Egyptians weapons on the upside leading way, these were used in the old times. While conversing, Nora comes to know that her father Dr. Miles’ tied wire has broken. It was the most disturbing situation. Because their chosen way to come had the similarity with the other 3  ways. Cutting of wire is going to create a biggest problem for them. Actually, it was only Dr. Miles who had attached the wire with him. They have no clue of returning because of the breakage of the wire. They arrive at these three points, each of which has its own symbol.

Taking a chance, they choose away. They don’t find a beacon of light even after a long walk on it. So they know that their chosen way is wrong one. They are not going towards exit but entering in the pyramid more. While walking, they reach a big hall where they also catch the sight of their broken robotic car. At the same time, stones begin falling from its roof. As a result, the ground is cracked and they also begin to fall down.

Their partner is also wounded. Dr. Miles, Nora, and team members try to free their partners but remain unsuccessful. Dr. Miles decides to rescue their injured partner at any cost. Suddenly, a coming animal injures their  one of the team members with its claw who is climbing up. As a result, that climber is fallen down getting injuries. And all are disappointed thinking they have been trapped in this pyramid. Here they see a stone-made door. As an archaeological team, they have the ability to read these symbols. Then they read these symbols, here is written, “Danger”. These symbols indicate to not open the door. All are scared and also want to leave this place. So they ignore the written symbols there. And they begin to try to open that door. Opening the door, they finally move ahead. They hear the voice of these military officers who were keeping an eye over them. These soldiers have come into pyramid in order to take research team after knowing the entry of them inside. These are the sounds of them. Meanwhile, the research team hears the scream of their injured partner.

When they come back to see their injured partner named Michel, he is disappeared from there. There are his bloodstains. Something dragged him away and these stains are visible. Looking at it, Dr. Miles and Nora are got upset. They are unable to judge, What is going on? One of the members of this research team begin to  quarrel with Dr. Miles and Nora. He says, Which type of doctor are you? As you cannot bring us out from this pyramid. But this pyramid was very complicated in reality.

It was not an easy task to search the exit. Anyhow, struggling to come outside, they observe a small tunnel where they are exerting to leave this place. While passing that place, they are attacked by an animal that looks like a wild cat. So they come outside after a great difficulty through that small tunnel. Coming outside the tunnel, they encounter a soldier there. He is among those soldiers who are on duty to stop them. And the soldier who is the rescuer is also killed. The story’s climax reveals when the writer tells, why these happening are occurring in this pyramid? Actually, there is the dwelling of Anubis in the pyramid. Anubis is a god according to the Greek mythology who was expelled out from heaven for a cause? Now, this pyramid is the residence of Anubis. It was also supreme who was expelled from heaven as a punishment.

And this pyramid is the prison of Anubis. Every enterer in this prison is killed by Anubis. And there is a reason behind this killing. He will be able to free from here if he searches for a virtuous man having a balance between his heart and soul. Finding such a person, he will get salvation. So he used to keep the human being on a weighing balance scale after killing him. He used to balance it by putting his heart on one side of the going to weigh weighing balance and his soul from the other. So he can evaluate that person’s suitability.

Because all inbound people in the hierarchy are immoral. And Anubis is still imprisoned. And Dr. Miles and his coworkers are progressively going to die in this triangle.

Killing Dr. Miles, When he balances his heart and soul, Anubis does not consider him virtuous. In the  end, We see the daughter of Dr. Miles named Nora who is near the light and at ending of this tunnel, She notices a young boy as she is about to step outside. Nora is moving ahead hardly feeling much tiredness. That young boy perhaps helping her to come outside. Anubis kills both Nora and that young boy coming there. And the story ends here. Please subscribe and like if you like an explanation. Otherwise, you can also watch other videos on our channel.