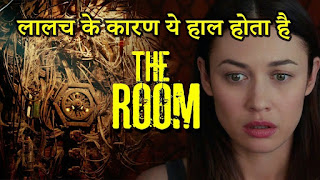 The movie that is being explained today actually relates its basic purpose. As if a man gets everything he wants, it becomes a poison to him. Because lust of that person continues to grow. It is obvious that it has been paid to achieve anything. Now let’s start the movie explanation! Movie’s main characters include  a boy Matt and a girl Kate. It is a young couple. They purchase a manor in a small city.

Matt is an artist while Kate is a translator. But both had quit their jobs and they had to do something new. The surrounding of their new manor has nothing where they are shifted. But that manor is spacious and splendid. While checking the house, Matt finds a very unique room. And they also get the room key from the things of house. As they go to open that room , the voltage fluctuation of house is started. And lights are switched off with it. Next day, they take electrician in basement calling him. And Matt is surprised going to basement. Because basement is full of electric wires. No corner was without electric wires. And there is a lightened wheel exactly at the center in the basement.

These lights are lightening while the house lights are off. Electriction takes this setting very odd. So he is unable to help them anyway. But going away, he says to Matt that you purchased this house which was empty for a long time,  I am shocked on it! And he more tells a strange thing that its previous residents were killed. Hearing it, Matt feels fear thinking that we are living in such house where someone has been murdered. And it was obviously threatening for them. She hides this conversation from Kate but searches through social media. . Then he comes to know that a boy killed a couple living in this house in the year 1975. But the reason of murder is unknown till today. Afterward that boy was sent to an psychiatric hospital. After it, Matt stays at that room alone taking a lamp. And he wishes for the other alcoholic drink. And a kept lamp beside him fluctuates and light is gone for a time. As the electricity comes on, he finds an alcoholic drink in front of him. Seeing it, he is afraid on this happening.

This bottle is like his own bottles. Wakening up in the morning, Kate notices that all house lights are fluctuating. And then she visits in that room to see Matt. As Kate enters that room, she finds that room filled with the different things including paintings, dresses and many more things. And then Matt informs Kate, this room can provide us our wished things. And Matte asks her to desire. Kate says on it, give me a good job! On it, Matt explains her, this room provides things not jobs. Just desire for a thing, you will get it!! Then she desires for money. Then they find money in the corner as the light fluctuates. First of all,

Kate dislikes it, Matt clears up. But they become covetous after that. They wish for the different alcoholic drinks, diamonds , expensive ornaments, dresses and arrange parties. And it continues for many days. And they make a money wall. They have taken many things from that room. They have amused and enjoyed much from it. But this room is going to be useless. Kate is depressed on it. And Matt talks about the baby but Kate does not agree with it. Because she had already lost her 2 babies. They both argue. Matt goes outside freshening him. And Kate remains at home in depression. A thought comes to her mind and she wishes for a baby going in that room. He also gets a baby in return. As Matt comes to his house ,

he is surprised seeing the crying baby. Shouting on Kate, he clears that we had to wish for things not any human being. What did you do? What may be the consequence? They cannot return the baby back and had become over sentimental. Matt searches the article of this house murder on internet. Then he knows the killer name was John Doe. And he had killed them because of this room’s wish. And he visits Psychiatric hospitals to meet that killer. Reaching there, John Doe knows that they are living in the same house. On it he says,

Leave the house as soon as possible! Returning back to his house, he fills up his car with gasoline. While checking his pocket, he finds no money but dust. Here a great secret is revealed about that room. And demanded things from that room will be perished leaving the house. He rushes to the house and begins checking once more. He is curious as to why this is happening. At last what is the reason behind it? But he finds nothing except electric wires. And these electric wires are not only in the basement but in the whole house. That baby is bitterly weeping so Kate takes her out the house. Matt forbids her to not take him outside.

But he does not reveal the truth. Inspite of this thing, she goes out the house. As she goes outside, the baby starts weeping loudly and his complexion is also changed. After sometimes, baby’s sound is no more but Kate is shrieking. She is calling Matt. Then Matt brings both inside. Then a strange thing is encountered. Their small baby is not infant now but had transformed into 7 to 8 years old child. Then we know that the given living things of that room will continue to grow up going outside the house.

And the growth of this age will turned him into old man putting him into death. So this is the reason that they had to keep him inside. Kate is left surprised knowing it. But she had accepted that child till then. And there are the matrimonial issues between husband and wife. Even they begin to live in different rooms. Kate’s son Shane is everything for her. Matt paints the black and white colour in his room. Shane is normal like other kids in living and appearance. But he is disallowed to go outside. There was a dispute between them taking Shane. Once Shane awakes the whole night due to their dispute and continues to wander in the whole house. Wandering in the house, he reaches near the electric wires and wheels in the basement. And everything is begun to clear before him gradually. And he also visits that room. He comes to know about the secret of his arrival in this World and he has extra  powers. Then next day,

Shane converts that room into a garden with many trees through his imagination. There is also snow and he makes snow man with it. Kate is satisfied with that child because she is fostering him considering her own child. But Matt is unhappy thinking that child can do anything using his extra powers. And that child was devalued. In the meantime, Matte receives a call from John Doe from  psychiatrist hospital. And he exposes his reality that why did he kill that couple? He says that I had killed that couple because of their wish of a child from that room. That child was no one but John Doe. He had grown old so it was necessary for him to go outside for searching. And he had to lead a life as a normal being.

But there are many restraints. Then room tells him that you will  have to kill that person who wished for your arrival in the World. So it is a cause that he kills that lady who desired. And her husband also becomes the victim. So he is imprisoned. Kate overhears all this conversation from another phone and leaves the house furiously taking the car. That big mistake has been committed by her. She does not return at home late night and continues her driving. While Shane is asking for his mother. Matt reveals the reality in anger. That we have demanded you from that room. And going outside, you will grow within 5 minutes and die after getting old. Then he brings him near the door dragging. But he becomes emotional taking him as a child.

On it, he apologizes that child and tells a story. Then they behave as father and son. Returning back to home at midnight, Kate is pleased seeing both together and thinks Matt finally accepted the child. Then Matt is awoken and they both are alone in the room. And Shane observes them outside the door and his heart feels something for his mother. And he is also aware the whole reality. Then he goes outside next day. He is transformed to a young boy of 17 to 18 adult as he returns. He attempts to shoot Matt coming inside. Kate is bruised and loses her senseless in the meantime. As Kate restores her senses, Matt tells her that he is dead in a fight between us. Hearing it, both are saddened.

That we had got a child for few days but now  he is no more. Then Kate says to him, I don’t want to live here but leave. Then Matt replies , we have not money. And above all, we can attain everything for our survival so we should not leave this place. Kate feels Matt’s changing behaviour which is turning him strange. Suddenly, he behaves oddly. And it comes to know that he is not Matt but Shane who was transformed into a man. Shane was aware about his extra powers. He transformed him into Matt because of her growing feelings for Kate. Then Shane changes that room like his house. Shane takes unconscious Kate into that room. Awakening, Matt searches both throughout the house but he is not able to find both of them. Even that room is also locked. Making a big hole in a side wall, he goes inside.

Where he finds the tangled electric wires. Removing them, he goes to the other side of wall. where he finds the same location of his house. Then Matt understands that it has been done by Shane. The Kate faces two persons of Matt’s appearance. In confusion, she calls Shane who responds on it. Then he comes to know about real Matt and Shane. And Kate escapes from here taking Matt. Everything was under control of Shane’s power. He begins to change the setting of whole house. And they don’t find any way for escapism.

The real Matt was running outside the house. Shane chases them over it. But they had come  to real house crossing that wall. And Shane also comes into the real house after them. Matt brings him out the house dragging. And then Kate shuts the door. Staying outside for a long time, he grows and transforms into an old man putting him into death. Kate is disturbed after this and then they leave the house. And movie also ends here.