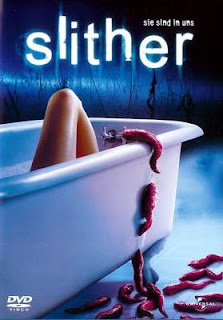 The story is about a small area of South Carolina, named ”Wilson”. People are living their lives happily there. But a night, a small mass transit falls from the sky in the forest of that area. No one knew what it is because it was so small in size. There lived a man named ”Grant”. He was so rich. He appeared to be old, but he married a young lady named “Starla.” They both are so impressed by each other and like each other a lot. We see them having a bad conversation one night. ”Grant” gets angry and leaves the house. He then goes to a bar where he meets a girl named ”Brenda”.

They drink the whole night. Later they head towards the forest. Then suddenly, ”Grant” sees that mass transit, which fell in that forest. He wanted to know what it is. He goes near it and looks at it heedfully. Suddenly a small needle comes out of it and inserts itself in Grant’s chest. He falls down due to pain. He was feeling pain and he was suffering badly from it. ”Brenda” who stood behind her, sees this and gets scared. The thing that was inserted in her chest goes to her mind through her chest. Right after it, ”Grant” wakes up and his eyes and nose start bleeding. He was observing his surrounding strangely.

It seemed clear that Grant’s condition is not good. They both go to their houses after this incident. Many changes started taking place in Grant after that. It’s morning now. ”Starla” comes to ”Grant”. She was guilty of the fight She asks for his apology. After it, ”Starla” leaves, and ”Grant” starts doing weird stuff. First of all, he goes to the market and brings a lot of meat home. Coming home, he acts weirdly.

He kills his own dog. Later he goes to his basement and locks its door so that no one can come there. ”Starla” gets to know that he has locked the basement. She asks why did you do that? to which he replies I’m arranging a birthday party for you”. Grant’s body was under the control of Aliens. They were controlling his mind. Changes could clearly be observed in Grant’s body.

Especially that place where that needle was inserted. The skin was getting damaged from there. Two weird tentacles came out of his chest which looked like snakes. From the day, this happened to him, he wanted to make his wife ”Starla” like him. But he doesn’t do this. It shows he still has some humanity left in him. Later, we see that ”Grant” goes to that girl’s house, whom he met that night. He starts inserting both of his tentacles into her belly. As a result liquid of Aliens enters her body.

Obviously, this was so painful. She was in discomfort. Grant’s condition was deteriorating. His face started to swell weirdly. When ”Starla” sees it, she asks him to go to the doctor. ”Grant” thinks that he is stung by bees. He imagines it as if he has met his doctor just now. But this was not the situation. He kept killing animals in that neighborhood, and they continued to fade away.

The possible explanation for that is that when he impacted “Brenda,” he inserted innumerable alien yolks into her tummy via tentacles. Brenda’s hormones were deeply offended, causing various changes in her body. As a result, she started feeling really hungry. Here, we observe that this is the reason why ”Grant” brought meat from the market. He killed all the dogs there because his hunger was growing immensely which was now uncontrollable. She kept eating. Police get the wind of this news. They get the report that ”Brenda” is missing from her home and on a doubt basis, they go to her home. They tell the whole story to ”Starla”. ”Starla” didn’t know anything. Even she didn’t know that she is living with an alien for the past few days. After it, the Police leave from there. She realizes this when ”Grant” comes in front of her. He wasn’t looking like a human.

He seemed a weird creature. She gets scared and calls the Police in a state of scariness. While she was calling the Police, ”Grant” attacks her. He tries to kill her and says that you’re a deceiver. At the same time, the Police reach there. As ”Grant” sees them he runs away. Police couldn’t understand which type of creature he was. Later, the Police and incharge of the Town try to solve this matter. Here, they get to know that ”Grant” is behind the disappearance of those animals.

He steals these animals. During the investigation, Bill gets to know about the house which will be his next prey. that house resident’s name was ”Ottis”. He had a small family of three daughters and a wife. He had an elder daughter named ”Kylie”. “Bill” declares that he is certain that he will attack this house. Later, he and his companions surround him and that farmhouse and start guarding that place. ”Grant” arrives there to hunt animals, as they assumed. He wasn’t looking like a human but a monster. They are quite surprised what is this thing? He kills his prey. After this, ”Bill” and his companions surround him and were about to catch him. ”Grant” had completely changed and looked really dangerous.

He attacks one of the men and divides his body into two. He runs away after killing that man. Police couldn’t do anything at that time because he was so strong and dangerous. It happened with ”Grant” because an alien insect was inside his brain that made his condition like this. He runs to the farmhouse where he had captivated ”Brenda”. Police chase them too. They get amazed and shocked after what they see. ”Brenda” had swollen like a balloon and looked like a strange creature. Because she had eaten a lot and, strangely, her hunger was not subsiding.

As they come inside, ”Brenda” gets blasted. ”Brenda” was wildly hungry because the eggs of that alien were in her belly. As she explodes, these insects spread all around in numerous numbers. They are alien insects and they attack them. These insects just try to go into the mouth. They try to control the human mind by entering the mouth just like they possessed Grant’s mind. ‘ ‘Bill” and ”Starla” cover their mouths and they are saved from them. Those insects spread all around, even in the farmhouse which was owned by that man.

They enter into the mouth of Mr. ”Ottice” and his all family members except for his daughter ”Kylie”. Because as it was entering her mouth, she saves her life by pulling it out of her mouth. Here, we get to know that those aliens possess the human brain and make them lost in their imagination and the human feels the thoughts of that alien. Here, ”Kylie” was also trapped in their imagination. She knows the purpose behind the arrival of these aliens and from where did they come. When she gets out of imagination, she sees that her parents and her sisters have gotten killed by aliens as well. They try to affect ”Kylie” too but somehow, she runs away to save her life. She goes outside and ”Bill” holds her.

They see that the aliens are spread around in a huge number. They were making humans like them by entering their bodies. Insect in Grant’s mind was the source of these aliens and all other aliens were his small parts. They couldn’t do anything for their protection due to late-night. Later, ”Kylie” tells them that I know from where did these aliens come and ways to vanish them. If we kill ”Grant”,

these aliens will get killed automatically and if we don’t stop them, they’ll keep growing. ”Bill” plans to kill ”Grant” after this. In this movie, ”Grant” is also named as ”Long one” because his hands and feet were too long. With the passage of time, he was increasing his size more. ”Starla” was still in Grant’s heart. He still had a love for her wife in his heart. Later, all escapers including ”Starla” get into an accident. ”Grant” takes ”Starla” with him to his house. He lays her down on the bed. She was faint.

He does her makeover and tries to make her more beautiful. When she becomes conscious, she sees that she is laying down on a bed in her house. When she looks around, she sees that everything is damaged. She sees many people calling her by her name. He was none other than ”Grant” in the bodies of the people, whom he had made his prey. ”Starla” comes down and sees a huge and dangerous monster in front of her. It is spread all around. He took up a lot of space in the house.

Because he had many people inside his body. All those aliens had the same brain. ”Starla” had a sharp-edged tool made of metal because she wants to kill ”Grant”. Later, ”Grant” tries to kill her. As he comes close to her, ”Starla” puts him into a sweet conversation and slowly gets closer to him. She says to ”Grant” that I’ll always stay with you. Hearing this, he becomes relaxed. When she takes notice this, she attacks her head, but nothing occurs because “Grant” has matured so potently. Regarding that, he tries to kill “Starla.” He nears her,

but “Bill” comes at the same moment. He tries to kill him but he fails. ”Grant” takes out his both tentacles. He inserts one tentacle in Bill’s belly but it only works when both of the tentacles enter the human body at the same time. ”Bill” grabs the other tentacle and puts a lot of gas in it through a gas cylinder. As a result, a lot of gas enters Grant’s body.

At the same time, ”Starla” shoots him which causes a huge explosion. It causes much fire, due to which an insect in his mind which was a real source, gets killed. As ”Grant” dies, all the people who had that insect in their minds are also killed with him. This incident took many lives.