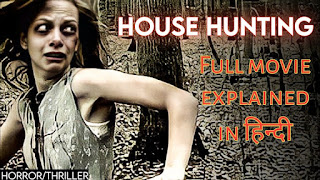 The story of the movie ‘’Wrong House’’ starts with a scene in which a girl running in a forest is shown. Regarding that, a house is shown as a girl called ‘’Susan” slicing house pictures from a journal.

Afterward, his husband “George” comes and says, “Let’s go!” She gets ready to assist him after answering some questions. George would like to invite his daughter, who is sleeping inside, to join him. She asks if she can stay here, on which George says, ‘’we’re leaving in half an hour’’. Later, that girl ‘’Emmy’’ tells her friend about ‘’Susan’’ that she’s so fake. Now ‘’George’’, ‘’Susan’’ and ‘’Amy’’ travel in a car. This car stops in front of a restaurant. They all go inside. Here, ‘’Emmy’’ sees a man who sat at the corner table. His face suddenly changes into a horrible face. ‘’Amy’’ gets scared but no one believes her words. In-car, ‘’Amy’’ says that she wants to go home. But her father ‘’George’’ says that we’ll go to visit a house first and then we’ll come back to our house. They reach that house after a long journey’ For Sale’’ was written there and a picture of its owner was also printed there. As ‘’Amy’’ sees a picture of that man, she tells that he’s the same man, she saw in the restaurant. But her words are ignored.

In a short time, they reach there. No one was there. There was a speaker from which the voice of ‘’Welcome’’ comes. This statement is also spoken that you are free to visit the house. It is also said that by pressing the button of the speaker, you can know and hear more about this great place. After a short while, a jeep comes there and another family comes who had visited the house before. Both families meet each other for the first time. Following that, George’s family drives toward a forest. A girl appears in front of their car as they are driving. She is injure when she falls to the ground. They all get down and see her and ask if she’s fine.

Her mouth was bleeding and she makes strange voices. She touches Amy’s face with her hand in a mysterious way. Immediately, the car of second family also arrives there and takes them away in this car. Everyone goes in front of that house where ‘’for sale’’ was written. Actually, both families were trapped here. Now they try to get out of here in a car but it stops in front of that house. The head of the other family asks them to go and stay inside. Whereas, his wife says that it’s a bad idea. ‘’Emmy’’ tells that this strange girl doesn’t want to go inside. Amy’s father ‘’George’’ asks her not to get scared, we’ll be here together. In a short time, they go inside. It was so dark there. This strange girl sees a man in a window upstairs. He has hidden a child’s face. He had put his hand on the child’s face. Later, ‘’Susan’’ tells that that strange girl is suffering from fever. The next morning, the voice of ‘’Welcome’’ comes from the speaker.

The same statement is repeated and everyone wakes up and they see that the strange girl wasn’t there. They look out the window at a man with his dog. The head of another family goes out but he disappears. When they come inside in a while, they find that strange girl. This scene shows that the tongue of the girl is cut. One month passes, a lady from the second family was cleaning that she sees a girl outside the window. She was her dead biological daughter. It is also demonstrated that the son of the second family walks with the assistance of crutches. He was recovering now. The Son of the second family had the name ‘’Jason’’. He goes outside the house with ‘’Emmy’’.

Jason’s father gives him the pistol before they end up leaving so that he can safeguard himself. “Jason” is with “Emmy.” ”Emmy” observes a tiny boy outside the window. She jumps back home and assures her father that she had seen a toddler. Her parents are busy with some notes and things, there was a picture too, where a picture of that kid was present as well. So, ‘’Amy’’ recognizes him and says that he is that kid. Everyone goes upstairs quickly but no one was there. Downstairs, the lady of the other family open up a box and take out many pieces of puzzles from it, and put this on the table. After this, when she was thinking to solve it, she hears the voice of ‘’Momi’’ behind her. When she turns, she sees her younger daughter stood behind her whom she saw through the window.

She hugs her daughter and sets her hair. That girl says that she can’t stay here and whispers in her mother’s ear. That strange girl was observing everything while lying on the sofa. No one was with this lady. She was trying to communicate with some guy ‘’Gallay’’ by actions. In the next scene, a view of the forest is shown and it was dinner time.

‘’Susan’’ says to that lady that she knows that you know something. On which that lady says that she doesn’t know anything and I’m not on file. ‘Susan’’ talks to her rudely, because of which she goes outside. As the lady of the second family goes outside, she sees her daughter again. She whispers in her ear again. In the next scene, ‘’Susan’’ has a dream, in which she sees her husband ‘’George’’. He was so violent. After it, she sees that man ‘’Ron’’ sitting on a chair again. Suddenly, she wakes up. She gets afraid of her husband and says that you can’t do this. Downstairs, ‘’Emmy’’ was trying to join puzzle pieces. Then the head of the other family comes and asks many questions from the strange girl standing beside her.

He becomes hyper after it. Emmy’s father assures him that nothing’s inside. Everything will be fine. I shall not let happen anything to you. In the next scene, ‘’Emmy’’, ‘’Susan’’ and ‘’George’’ reaches the forest. Jason’s father points his gun at him and says that you are planning to escape one by one. Emmy’s father says, ‘’Of course not!’’. The next morning, ‘’Emmy’’ was washing her face that she sees her mother behind her in the mirror. Her throat was cut.

. On the other hand, ‘’’Susan’’ moves with a small knife and picks up a hammer as well. She hits the hammer on Jason’s father’s back. Jason’s father was about to die due to this but ‘’Jason’’ asks him that how can they get the road? He asks him about the road but he dies. ”George” takes her daughter and that strange girl ”Emmy” to the side. When Susan is constantly crying She says don’t do that In the same way, ”George” now decides to go out. He gives his gun to his daughter so that she can protect herself. While on the other hand, ”George” was trying to locate the road through the back steps in the forest.

As he reaches the mid of the forest, he hears the voice of ”Hello”. That person ”Ron” was standing behind with his dog. But when ”George” turns back, he sees his twin. ”Emy” and that strange girl are hidden behind the tree. ”Geroge” goes there and pulls that strange girl by her hair. Later, kills her with a hammer and that strange girl dies. ”Emmy” becomes very nervous and starts weeping and fires her father with her gun. As a result, her father also dies. Now she runs toward a forest. She sees a car. and falls in front of it. When a car stops there, people make her sit in it. She sees that some puzzle pieces are in her pocket.

This car stops in front of that house again. She is just sitting there when that ghost boy and his father stand at the other car door. That ghost boy says, ”She’s back Daddy!” and pulls her toward them. That man cuts Emmy’s tongue with scissors. This complex movie leaves many questions The author explains that essentially, ghost boy and ghost man are killing people. by trying to take over the human body and tormenting everyone psychology ‘ We eventually discover that this was an old loop that would repeat itself.

As we know now that Emmy’s tongue is cut and she has become a strange girl now, for the people who’ll come to visit this house which is for sale. Just like this, ”Emmy” will hit the car of this family and they will bring this strange girl into the strange house. They all will be trapped and killed as well. That’s the way this story will go.